Wiz Hold Up Against Miami’s Heat in Big Win

The heat has been getting strong on the necks and the seats of the Washington Wizards, so it was fitting that a trip to Miami on Saturday was just what the Wiz needed to get back on track.

Bradley Beal was efficiently effective, scoring 18 points on 6-of-10 shooting despite foul trouble that limited him to just 28 minutes of game action. His teammates picked up the slack, with Austin Rivers and Jeff Green both scoring double digits off the bench in a balanced attack, led by John Wall’s 28 points in a come from behind 116-110 win over the Heat. 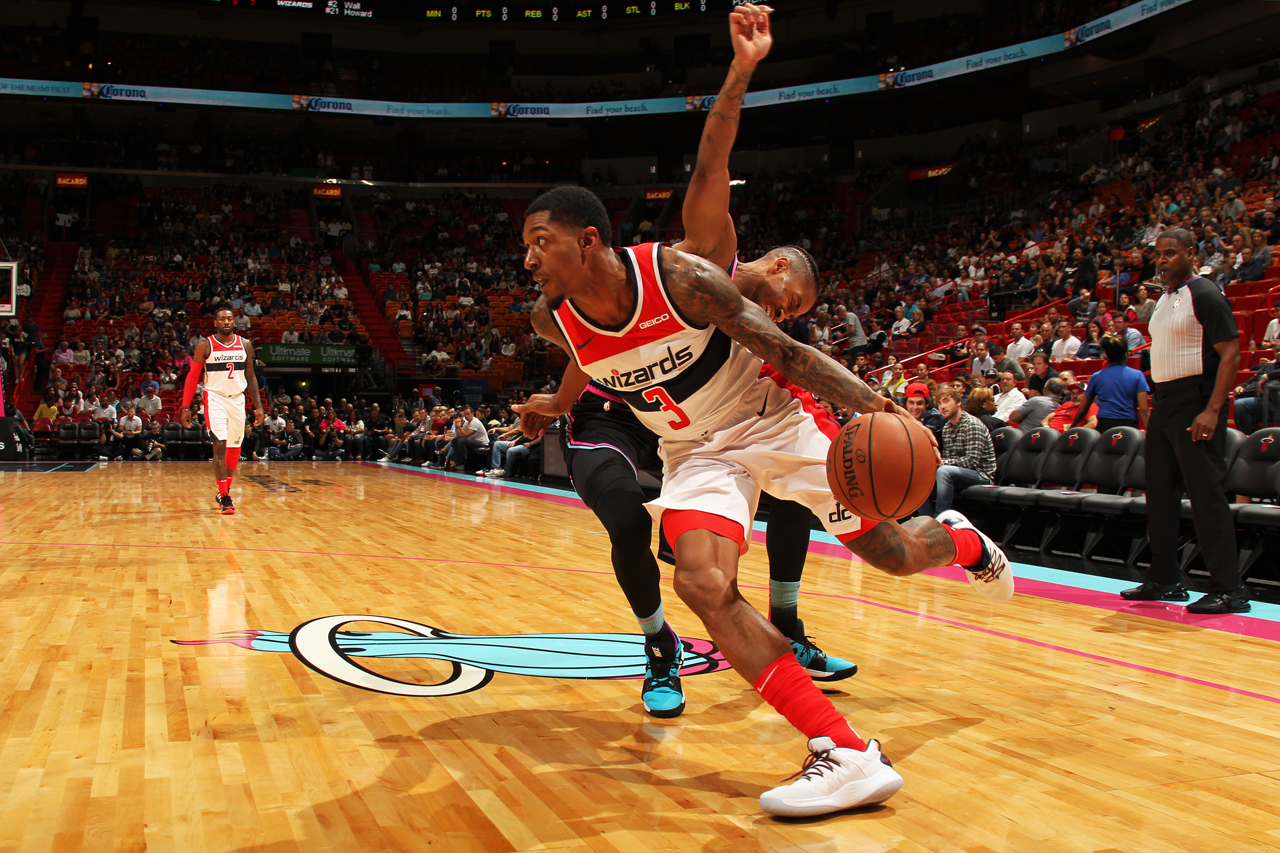 Miami got off to a hot start, pouring in 35 points in the first frame to establish a double-digit lead, but the Wizards won each of the final three quarters, chipping away at Miami’s lead, which reached 12 early in the second frame, before halftime and in the third. Washington then took command in the fourth and pulled away with the win.

“They made six threes in the [first quarter] and we limited them in the second half,” Brad said after the game. “That’s just a matter of effort, giving your all and accepting that challenge. Knowing that each guy is able to shoot and put it on the floor too, so you have to be able to be ready to go, be in a stance…just being more aggressive defensively, running them off the line.”

No. 3 tallied Washington’s first points of the game from the free throw line, but also found himself in fould trouble early, picking up a pair in the first five minutes of the game. He added a bucket and an assist on a three by Wall before ducking out of the game with 4:27 left in the quarter and the Wizards down one. From there, Miami finished the quarter on a 16-7 run to establish a 10-point lead.

When he returned midway through the second frame, Miami’s lead was steady at 10, but he and his teammates began chipping away at it. His bucket with under six minutes to go in the half cut it to four and after a brief Miami run pushed the deficit back to 10, he was on the receiving end of an alley-oop from Wall to make it an eight-point game. No. 3 added another bucket with under a minute to go to cut the deficit back to four, but picked up his third foul with 10 seconds left in the half. Still, Washington closed the half strong and trailed by three, 61-58 at the break. 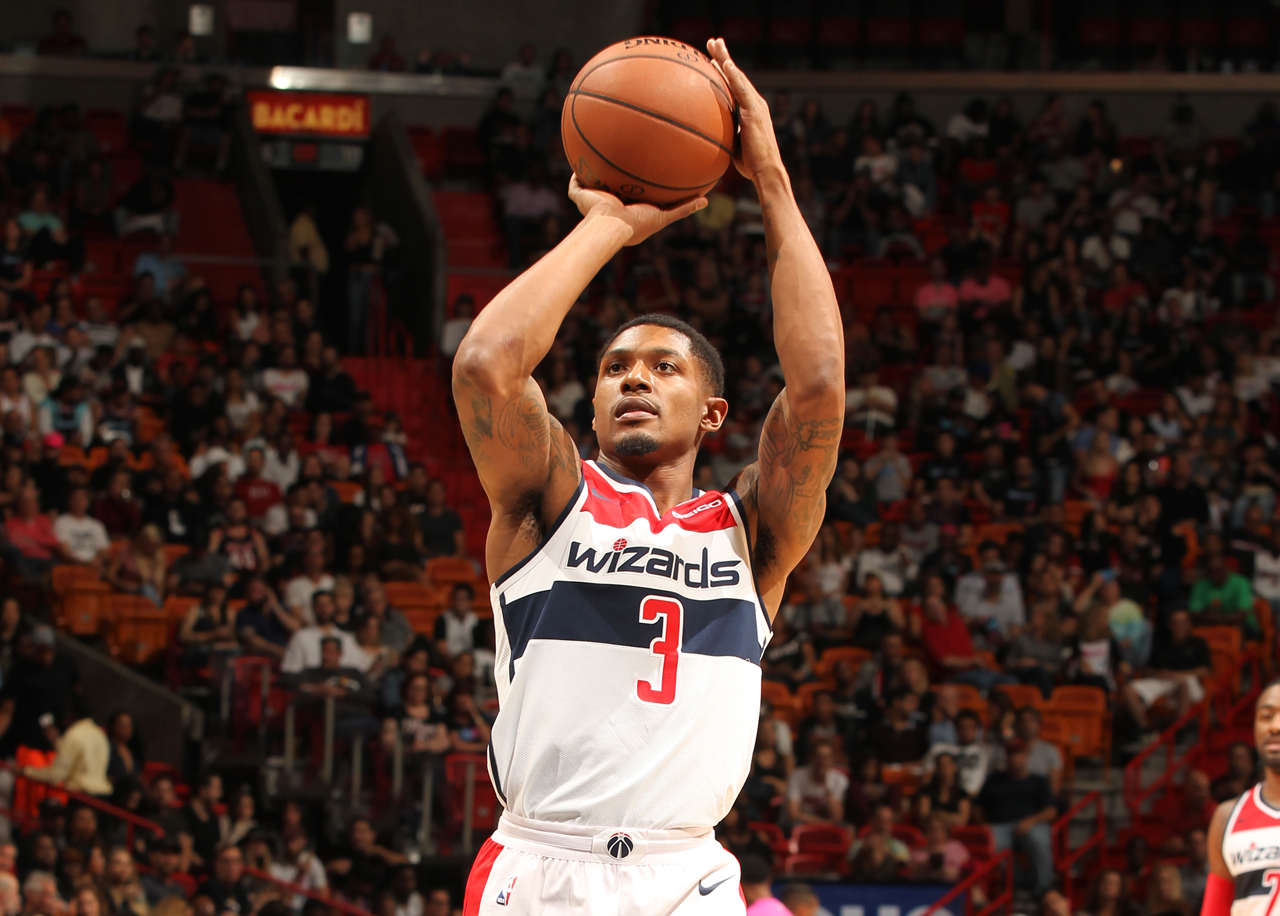 After Otto Porter opened the second half with a bucket to make it a one-point game, Brad buried a three to give the Wizards their first lead since the first quarter. The teams traded blows from there, and after Miami took the lead, The Panda drilled another trey to make it 68-66 Washington. Unfortunately, he picked up his fourth foul minutes later and was forced to return to the bench for an extended period.

This time though, the Wizards picked up his slack, refusing to fall behind despite the absence of one of their top players. Thanks to some excellent defense, and bench contributions from Rivers and Green, Washington stayed in the game and trailed by just two points after three.

The fourth quarter then belonged to the Wizards. Washington started the quarter on a 9-1 run and never looked back. The lead was six when No. 3 returned to finish the game, halfway through the quarter and pushed up to 14 when he knocked down a free throw for his final point of the night and Wall followed it with a trey for his. At one point in the fourth, the Wizards, who trailed by as much as 12 over the course of the evening, held a 17-point lead, and they cruised to the win from there. 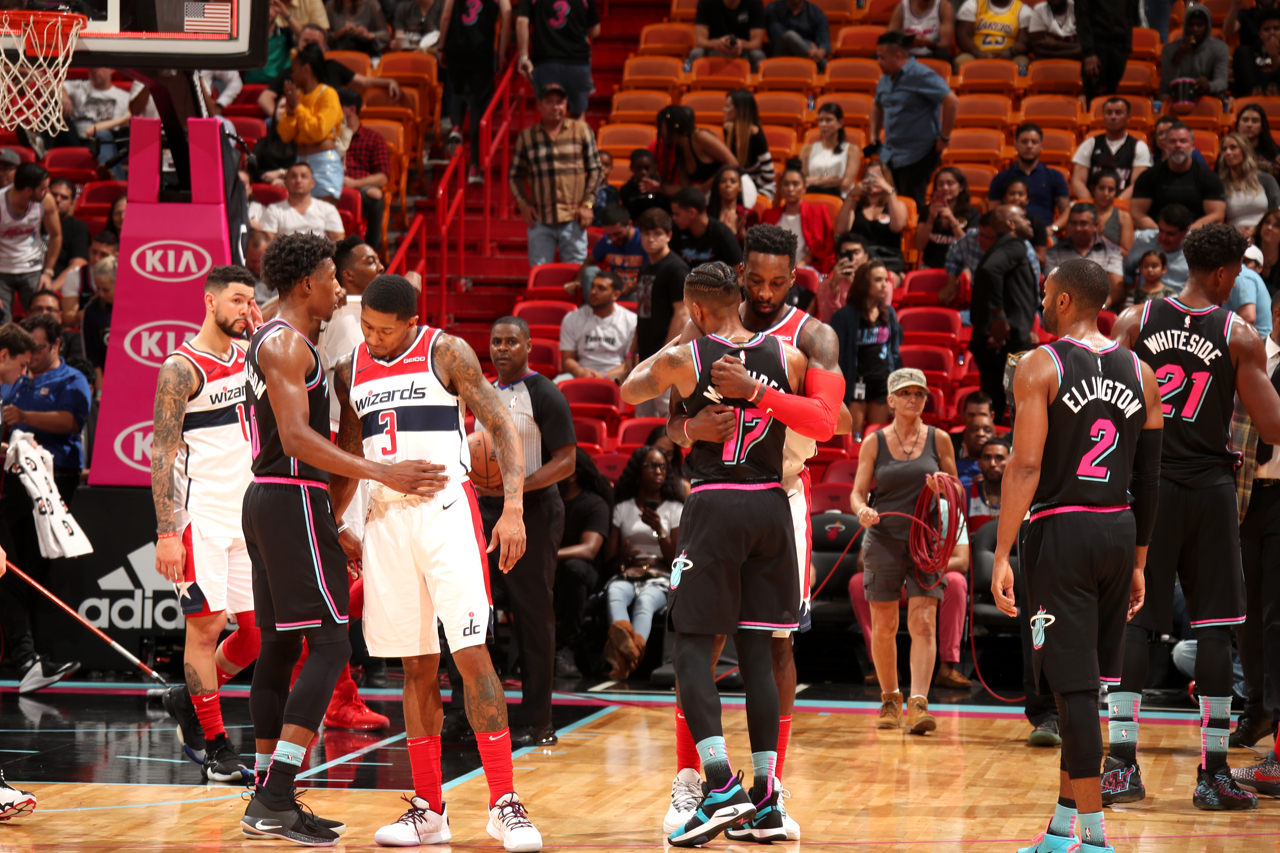 But after the game, Brad admitted that while ending a two-game losing streak and beating a divisional rival was vital, the Wizards, who now sit at 3-9 through 12 games can’t rest on this win like they have their previous two.

“It’s definitely a great game to build off of,” he said. “It’s a division game, so there’s definitely good momentum and energy. We’re coming off a back-to-back, so that’s a good sign for us. But we’ve still got a lot of work to do.”

Washington returns home to tip-off a five-game homestand on Monday night when they host the Orlando Magic, who just defeated them 119-107 in Orlando last Friday. Tip-off from Capital One Arena is slated for 7 p.m. and the game can be seen on NBC Sports Washington.