A Season of Promise in Washington

It wasn’t always easy for Bradley Beal and the Washington Wizards during the 2020-21 season.

In fact, things were looking downright bleak early in the season when the Wizards dropped to the bottom of the Eastern Conference standings with a 17-32 record.

Yet when it was all said and done, the Wizards didn’t give in and didn’t give up. Brad and his teammates refused to let 2020-21 be just another lost season. Instead, they turned things around with a fantastic final stretch of the season, sparked by an eight-game winning streak throughout April, which helped them nab a spot in the NBA’s inaugural Play-In Tournament and eventually the eighth seed in the Eastern Conference. 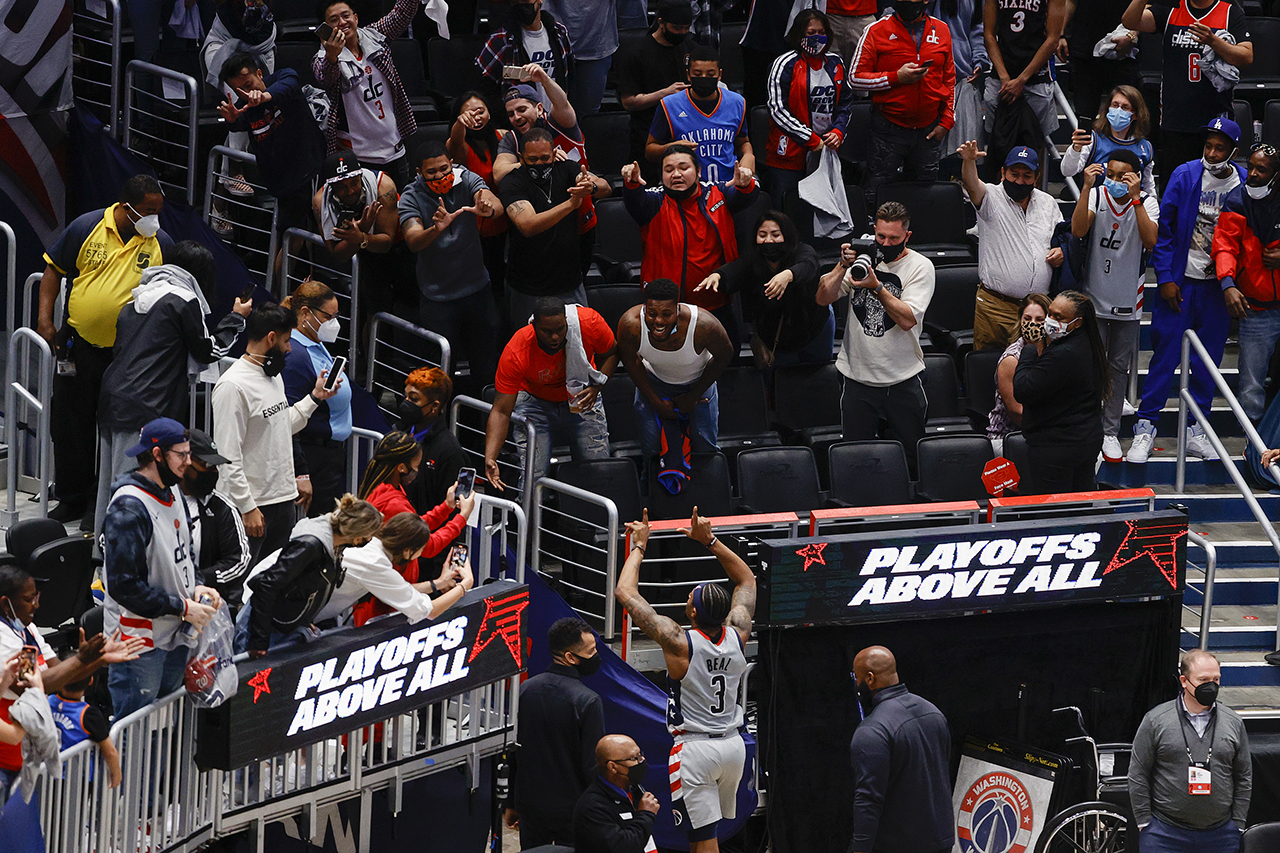 Though Washington lost their first-round playoff series in five games to the top-seeded Philadelphia 76ers, it’s hard not to look at this season as a step in the right direction for BB and his team. After all, the franchise made its first playoff appearance in three years. That’s why, when Brad looks back on this season, he’ll remember the adversity this group of young Wizards faced, and how they responded, more than anything else.

“We made do with what we had, at times we had a lot of guys out, a lot of different lineups throughout the year, so for the most part I was happy with that,” Beal said. “I was happy we competed and gave ourselves a chance at the end of the year. We obviously still need to get better. We have a lot of room for improvement all across the board.”

While the franchise certainly does still have areas in need of improvement to address this season, they have a great place to build from, as Brad’s star just keeps shining brighter.

No. 3 just wrapped a career year in his ninth season in the league, setting career-best marks in points per game with 31.3, free throw percentage at 89 percent, and field goal percentage at 48.5 percent. Brad’s incredible season, which earned him his third All-Star appearance, can be attributed to his dominance as a pick-and-roll ballhandler as well as his ever-improving mid-range game. According to Cleaning the Glass, Brad’s 47 percent field goal percentage from the mid-range area put him in the 87th percentile among all wings in the NBA, an elite clip considering the fact that Brad shot 46 percent of his attempts from that area of the floor.

A lot of BB’s success can also be attributed to his chemistry with co-star Russell Westbrook, who joined the team in a trade prior to the season. Westbrook’s playmaking ability and aggression in transition ramped up Washington’s tempo and made them one of the toughest teams to stop after a live-ball rebound. Playing alongside Westbrook, Brad was able to put together some of the best performances of his career, including a career-high 60-point game against the 76ers on January 6.

Brad also posted another 50-point game against the Indiana Pacers on May 8, but those weren’t his only big-time scoring nights this season. No. 3 ended the regular season with eight games of at least 40 points while shooting at least 50 percent from the field in seven of those outings. He also displayed the clutch gene he’s been known for since he entered the league, including two magnificent fourth-quarter performances against the Golden State Warriors that pushed the Wizards to victory on both occasions. His game-winning four-point play in the final seconds in their matchup on April 10 was especially impressive and may prove to be one of the most memorable game-winning shots of his career.

With Westbrook next to him as well as promising young players like Rui Hachimura, Deni Avdija and Daniel Gafford, as well as the expected return from injury of big man Thomas Bryant, Brad believes the Wizards could be an intriguing destination for this year’s top free agents.

“Hopefully teams watch us and see what we’re capable of doing and how we compete,” Brad said. “We’re a very competitive team. We don’t care who it is, everybody laces their shoes up just like we do. We’re going to go out and compete and play hard. Get out and play fast, that’s who we are and what we do.”

Heading into his tenth season as an NBA player, No. 3 is hoping to continue to grow as a player and as a leader while the team around him hopes to build off their first playoff run since 2018. Even with another All-Star appearance under his belt and the best numbers he’s had in his career, BB has aspirations for even higher levels of play.

“Obviously, I’ve had a good year. Made All-Star, hopefully make All-NBA; whatever the case may be. Eventually, I want to be an MVP-caliber player,” BB said. “So, maybe that’s what’s next. Just continue to push myself to be in better positions to succeed.”

With the way Brad’s career has gone so far, an MVP season doesn’t seem too far out of sight.