The Washington Wizards and Boston Celtics have now played two instant classics in the opening two weeks of the season, and Washington has emerged victorious both times — this time thanks in large part to the efforts of Bradley Beal.

No. 3 had his best night of the young season, scoring a season-best 36 points along with seven rebounds and six assists as the Wiz secured a 115-112 victory over the Celtics at Capital One Arena. Washington survived a fourth-quarter comeback by Boston to take the lead, forcing not one but two overtimes.

In that second extra session, Brad soared in for a layup with just over a minute remaining to give Washington the lead and they held on for their fifth win in the first six games of the season.

It’s just the third time since the NBA/ABA merger in 1976 that Washington has begun a season 5-1.

“It feels amazing. I tell these guys all the time, they can be a part of a lot of history over here,” Brad said “We always talk about what a culture is, and I emphasized this at the beginning of the year, it’s what you make of it. The 15 guys we have in the locker room, it’s what we come in and do. [We] hold each other accountable…together as a unit. We create that atmosphere. We’re just having fun. We embrace each other on the daily and it’s amazing to be where we are. We have that humble and hungry mentality. We haven’t scratched the surface yet.”

This is what it takes every night in this league! Keep going! #DCAboveAll pic.twitter.com/7ZyppPJmja

Brad got Washington off the mat early in the first, scoring 12 points in the opening frame, including seven of D.C.’s first nine. The Celtics held a brief lead at the outset, but three straight buckets by Brad in about a minute and a half, had the Wizards in front.

They led by as many as seven and held a five-point lead after one.

Boston clawed back in the second, but a superb effort by Montrezl Harrell, who once again scored 20 points, including 10 in the second frame, allowed Washington to maintain a six-point halftime lead.

The Wizards continued to fight off the Celtics in the third, but a late surge allowed Boston to take a brief lead. Brad had eight more points in the third, but Boston outscored Washington to cut the Wiz lead to just three entering the fourth. 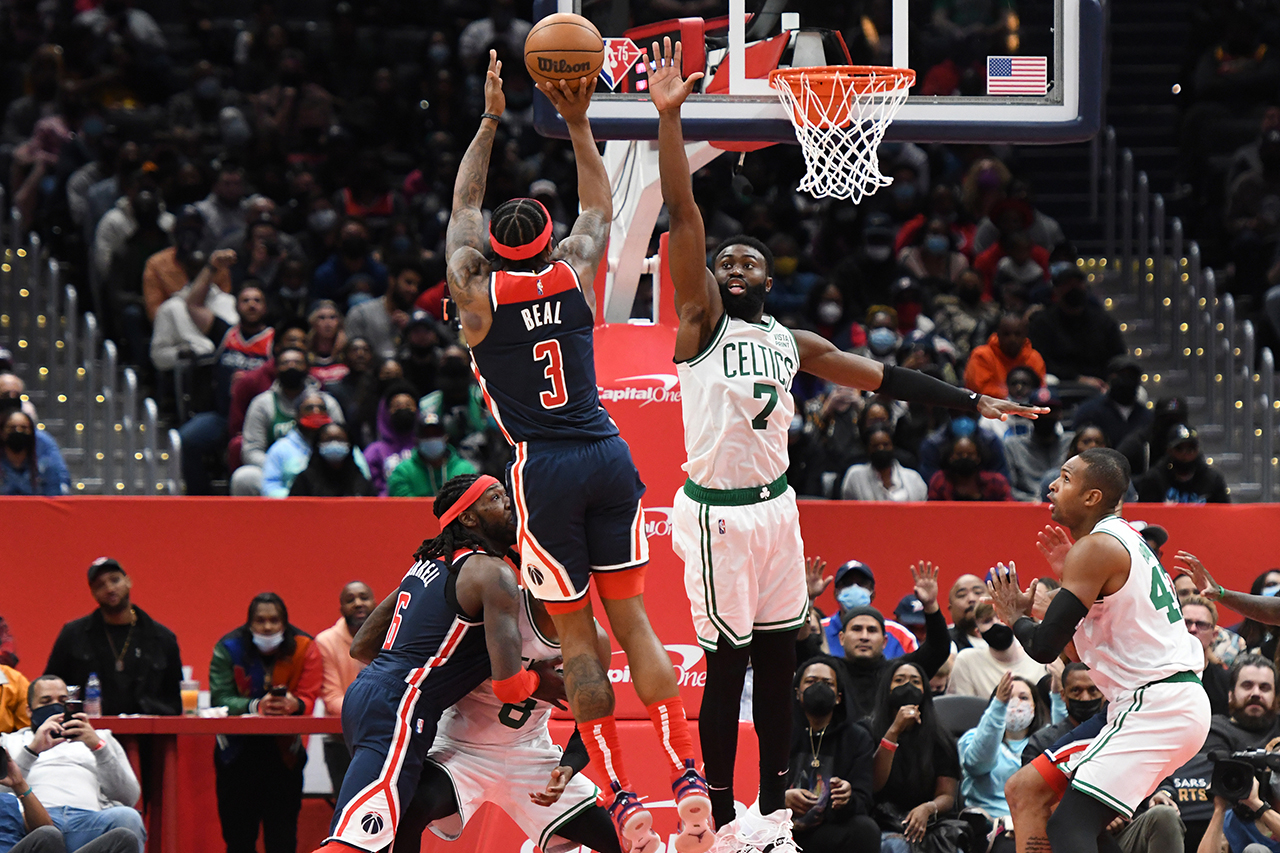 D.C. held onto the lead for almost the entire fourth frame, but Boston hung in, tying the game twice before back-to-back Jaylen Brown buckets in the final minute and put them ahead 103-102 in the final seconds. A free throw by Spencer Dinwiddie sent the game to overtime.

The Celtics appeared to take control early in overtime, establishing their largest lead of the game, 109-103, but the Wizards battled back, getting to the bucket at drawing fouls on the offensive end, where Brad and Harrell each made a pair of free throws. Harrell’s pair cut the deficit to just two and a stop set up No. 3 to tie the game with a layup with 25 seconds left.

Another stop from the Washington defense sent the game to second overtime.

BB opened that second extra session with a bucket, which was answered with one from his buddy Jayson Tatum for Boston. A free throw from Dennis Schroder gave the Celtics the lead again, but Brad’s bucket with 1:07 on the clock gave the Wizards the lead for good and Dinwiddie and the defense closed out the win.

“We show a lot of resiliency, and we don’t panic. We don’t get flustered,” Brad said. “We stay calm and poised. It’s a game of runs. We’re going to go on a run, they’re going to make a run. But we trust our defense. Our defense is what wins us, that’s the reason why we’re 5-1. When the stretch comes down and we need to lock in and get a stop, everybody’s locked in and in-tune. That’s the benefit of our team. That’s definitely what won us the game tonight.”