Bradley Beal’s return has had the Washington Wizards offense humming and No. 3 and his teammates are both thriving with BB as the Wiz point man.

The short-handed Wizards moved Brad to point guard for the first time in his career before Saturday’s game against the Bulls and the result was a career-high in assists for No. 3 in a closely contested loss to the Bulls. He remained there for Monday’s game against Charlotte and with the offense running through Brad, Washington came out on top in another shootout.

Brad’s ability to efficiently score and still get his teammates involved allowed for a masterful performance. He ended the night with 35 points, eight assists and seven rebounds in a 124-121 home victory over the Hornets.

In addition to Brad’s big night, Kyle Kuzma contributed a double-double with 36 points and 14 rebounds. The Hornets battled all the way and were led by three veterans, with Gordon Hayward, Terry Rozier and Miles Bridges each scoring over 20 points. However, the Wizards duo of Beal and Kuz scored 23 of their 71 points in the fourth quarter to seal the game.

Afterward, Brad talked about the importance of having multiple players with the confidence to make those plays down the stretch.

“I’m going to take shots and make plays and Kuz, he’s going to take them [too],” Brad said after the game. “That’s the type of player he wants to be, that’s who he can be. It’s exciting for me to know that I don’t have to make every shot, take every shot down the stretch, I can be able to keep defense on their heels and if I have something I can take it. If not, I’ve got plenty of shooters out here…it’s great that we have that type of confidence and that we have this chemistry that we have flowing right now.”

In the opening minutes of the contest, Washington and Charlotte kept exchanging shots, but when Brad buried his second three pointer of the quarter, Washington took a three point lead, 10-7. That trey also jumpstarted an 14-2 run for the Wizards, as they caused turnovers on defense and finished at the basket on the offensive end. To complete the run, Deni Avdijia stole a pass from LaMelo Ball and found Beal under the rim, where No. 3 finished the layup, pushing Washington’s lead to double digits, 21-9.

Charlotte started to claw their way back into the game with under five minutes left in the first frame . After a Beal turnover the Hornets’ Cody Martin found Bridges under the rim who finished a reverse dunk, cutting their deficit to eight, 27-19. With Beal on the bench for the final minute, Washington’s role players Kentavious Caldwell-Pope and Davis Bertans stepped up by scoring eight points to give the Wizards a comfortable lead at the end of the first frame, 38-25.

The second frame saw and even larger shift of momentum in Charlotte’s direction as Miles Bridges scored a quick six points, which cut Washington’s lead to seven, 38-31. The Hornets continued to take advantage of the Wizards miscues as Bridges and Gordon Hayward combined to score 25 points in the second frame. But after a Bridges jumper briefly gave Charlotte the lead, Brad responded with a driving layup which resulted in a three-point play to restore the lead. However, the Hornets controlled the final three minutes of the first half with an 11-4 run to take a 64-56 halftime lead. 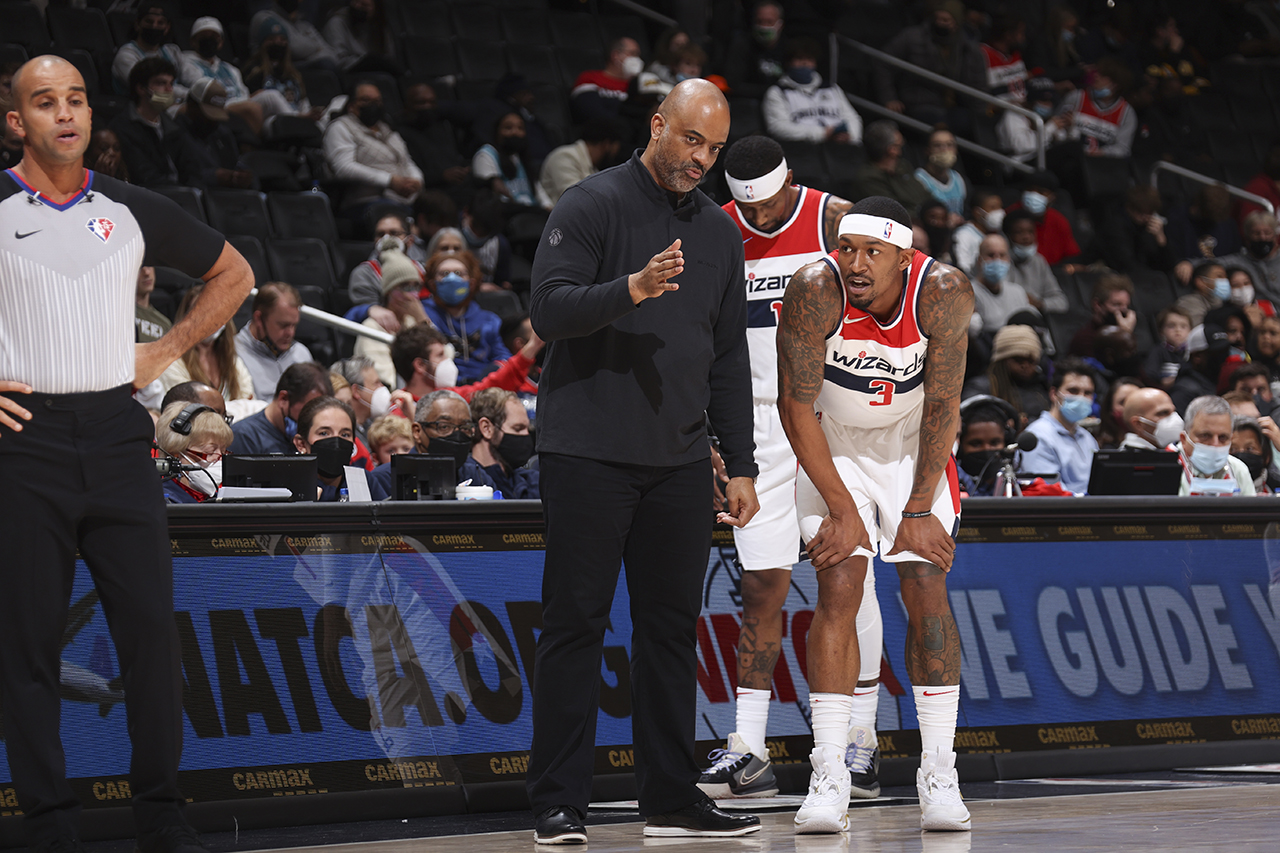 The third quarter began with Kuzma scoring five points, but Charlotte kept finding the open man which created easy baskets and their lead grew to double digits, 69-56. With under five minutes left in the third frame and his team in danger of being blown out, Brad took control of the offense.

First he found Corey Kispert open for a three pointer. Moments later, No. 3 drew a foul and hit two free throws. Then Kispert returned the favor by finding Beal open for a three of his own. This sequence helped cut the deficit to single digits, 85-76. With the offense starting to click again, Washington’s defense stepped up and only allowed the Hornets to score three points in the final two minutes of the third. Offensively, Brad continued to take charge by driving inside the paint and finishing two layups. His 11 points in the third quarter put the Wizards in position to finish the comeback, down just six, 90-84.

A monster start to the fourth helped the Wizards flip the script one more time, as their 11-0 run to begin the final frame gave D.C. a 95-90 lead. The two teams continued to exchange shots down the stretch and, neither team could grow their lead past three. When Brad knocked down a pair of free throws to knot the score at 100-100, it started a string of two ties and five lead changes in the middle stages of the fourth.

With three minutes to play, both teams felt the urgency. Kuzma hit two big threes, but Rozier responded with seven points of his own to give the lead back to Charlotte, 113-111. On the ensuing possession, Brad dribbled the ball up from the point and picked up speed when he noticed an opening inside the paint, this led multiple Charlotte defenders to collapse on him, leaving open shooter and No. 3 used his elite vision to find Kuzma wide open for a three, not only taking back the lead, but also the momentum, 114-113.

During the final seconds of the game Brad and his teammates hit all their free throws which gave them a six point lead with 1.6 seconds left to play. Rozier launched a long distance three which found the bottom of the net to end the game with a final score, 124-121. Beal’s groove as a point guard, along with Kuzma surge as a scorer, paved the way for the Wizards first victory of the new year.

“He’s definitely asserting himself, being super aggressive and he understands that he has an opportunity in front of him. We need him to do that. We need him to be aggressive. He’s had success with it,” Brad said. “He’s so talented, he has great size, his versatility can be used to his advantage night in and night out. He’s just kind of figuring out easier ways to score and easier ways to assert himself.”

The Wizards look to continue their offensive success against the Houston Rockets. With Houston visiting Capital One Arena Wednesday. Tip-off is scheduled for 7 p.m. ET and the game can be seen on NBC Sports Washington.