With teammate and backcourt brother John Wall ailing on Sunday, Bradley Beal stepped up to help the Wizards snap a two-game slide with a big win on the road in Toronto.

Following a disappointing pair of defeats on their home court at the hands of the Suns and Cavaliers late last week, Washington made a brief trip north of the border and the Canadian climate was just the change of pace BB and his teammates needed.

Brad tallied a season-high 38 points on 16-of-26 from the field, including 4-of-6 from deep, and tacked on five rebounds, four assists, and a steal as the Wizards improved to 5-4 with a 107-96 win over the Raptors.

It was an impressive victory for the Wizards, especially without Wall, who missed the game with a sore shoulder. Brad noted afterward that he did his best without his usual running mate.

“It’s always tough because he’s a great floor general,” BB said. “I knew they would be keying on me, one way or another. As best as I could I had to get some shots and be as aggressive as possible.”

No. 3 was on fire from the outset, burying a three just 31 seconds into the game off a feed from Otto Porter to give the Wiz an early lead that they never relinquished. From there, he attacked the Raptors from all areas of the court, moving without the ball and using backdoor cuts to get to the rim, or using screens to get open looks off the dribble. He finished the quarter with nine points and after one Washington held a firm 15-point lead.

The Wiz reserves held steady with the lead in the early stages of the second and shortly after BB returned to the game, he picked up right where he left off, reeling off nine more points in the final two minutes of the frame to make sure the lead stayed firm entering the break. They hit halftime with a 62-46 lead and Brad had 22 of those 62 points, much to the delight of his coach.

“He’s really good. It’s not a fluke. He’s one of the best guards in the league,” coach Scott Brooks assessed after the game. “He just scores from so many places on the floor, so it’s just hard to double-team him. And we move him around in our offense so [opponents] don’t get a daily dose of the same thing. Our bigs set great screens for him, and his outside shot is flawless.” 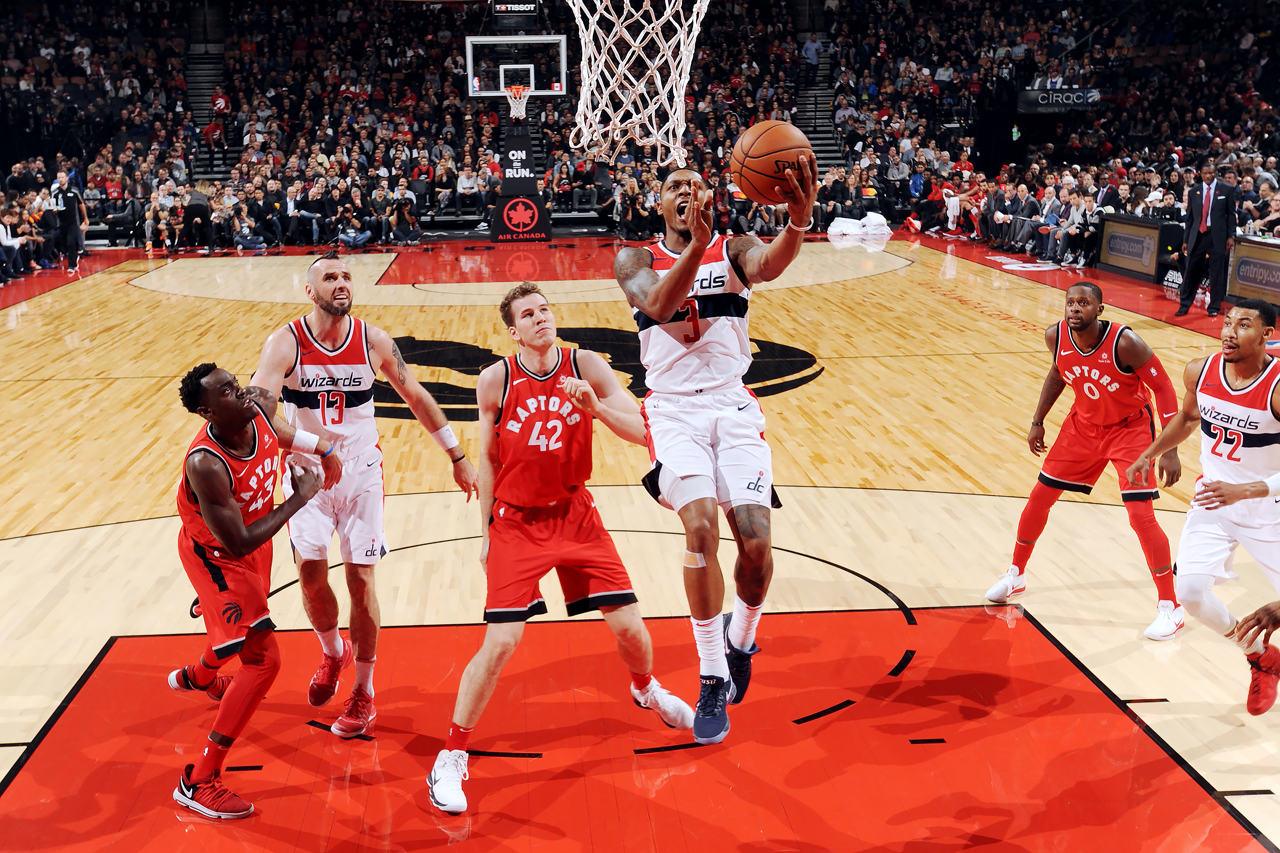 Toronto came out aggressive in the third quarter, briefly cutting the deficit to just seven, but after Porter buried a three to extend the lead back out to 10, Brad buried one of his own to push it back to 13. Toronto wouldn’t stop coming, however and pulled within three early in the fourth. But the efforts of BB and teammate Kelly Oubre helped put the game out of reach.

Over a span of 2:21 midway through the fourth, Bradley scored or assisted on 10 of 12 Washington points during a 12-2 run that pushed the score from a tight 88-85 with seven minutes to go, to a well-in-hand 100-87 with four minutes to play. Oubre hit the dagger during that run, off a feed from No. 3, but it was the performance of BB that had his teammates raving afterward.

“Hands down he’s the best, probably go-to guy at the two spot in the league. I mean, he’s just a freak right now,” Wiz center Marcin Gortat said. “Some shots that he’s making around the basket, attacking the rim, I’m having a great position because I know it’s going to be a rebound for me, but he’s just making them. With fouls, without fouls . . . he’s playing completely at a different level. He’s a mad man.”

The Wizards and their mad man head back home this week, where they’ll host their next four games with a chance to get rolling. The homestand begins Tuesday with the Dallas Mavericks in town for a 7 p.m. ET tip off. The game can be seen on NBC Sports Washington.