Best of Beal – No. 4: Panda Rallies Wiz Over Celtics in Double OT

Beal’s No. 4 performance of the season came exactly one month after No. 5, in a double-overtime thriller against one of the league’s best, the Boston Celtics. BB’s stellar second half rallied the Wizards from a 20-point deficit to win on the road in Boston.

PANDA’S 29 AFTER BREAK LEAD WIZ BACK FROM BRINK

As the league seemingly moves deeper into the era of super teams, old school rivalries amongst strong squads are starting to diminish. But there’s still at least one that has been brewing for a few years on the East coast, between Washington and Boston.

After the teams went head-to-head in an epic seven-game series in the 2016-17 Eastern Conference Semifinals, which the Celtics won, they didn’t meet again ’til Christmas Day 2017, a Wizards win in Boston. The Celtics took their measure of revenge in D.C. in February, setting up this battle of Eastern Conference contenders in March as something of a rubber match. And the game lived up to the hype, in large part because of a second-half comeback fueled by Bradley Beal.

After getting off to a slow start, the Panda asserted himself in the second half and scored 29 of his 34 points following the halftime break. Additionally, with John Wall still a few games away from his return, BB continued to command the offense. He stuffed the stat sheet with nine assists and seven rebounds and led the comeback effort that ultimately silenced the TD Garden crowd at the conclusion of a 125-124 Wizards double-overtime win in Boston.

“It tested who we were as a team,” Brad said. “They came out and played a lot harder than we did the first half. I definitely credit my teammates. We could have easily folded or gone in the opposite direction. We did a good job of staying poised and battling.” 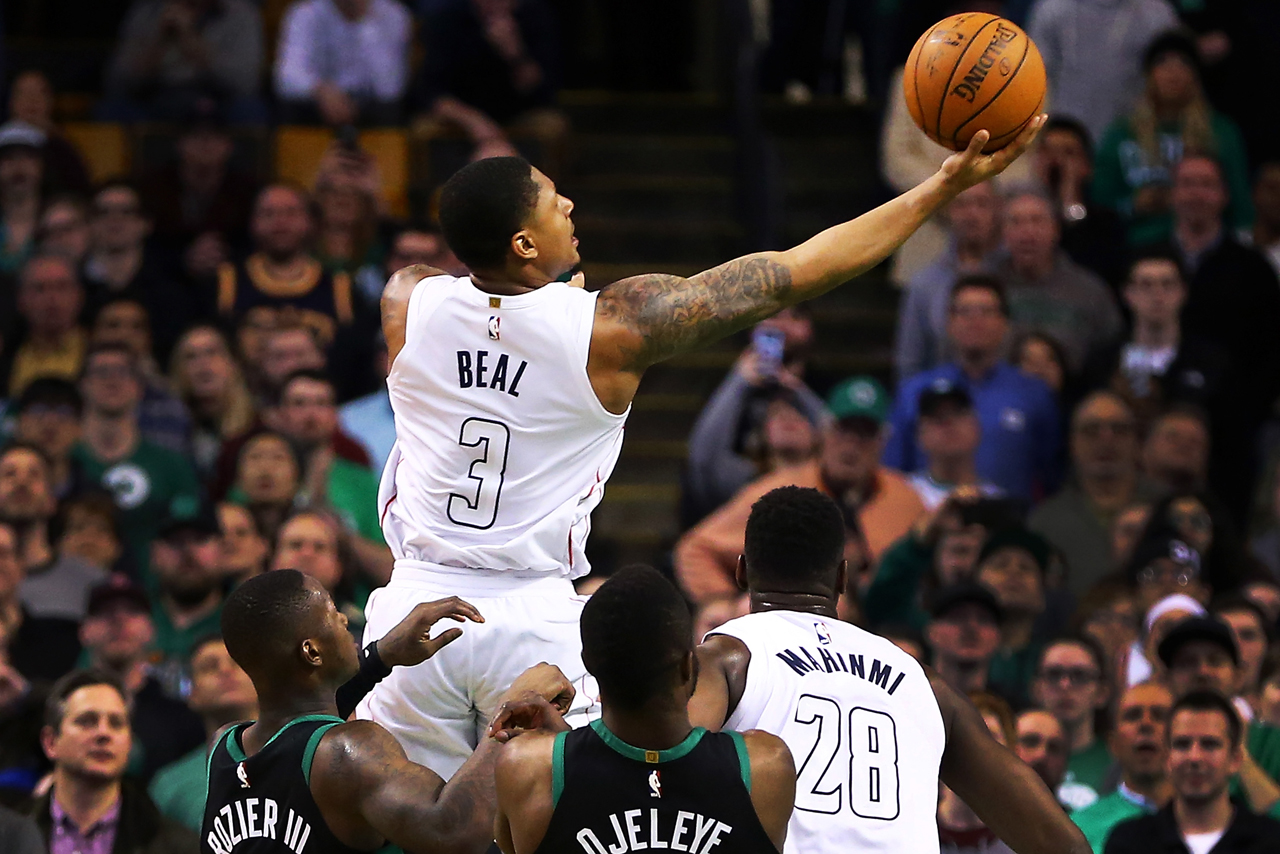 The game was a strange one from the outset. Both teams entered the contest down an All-Star point guard, the Wizards without Wall and the Celtics without Kyrie Irving. Injuries to Jaylen Brown and Al Horford as well forced Boston to run out a makeshift lineup, which featured Jayson Tatum, Brad’s St. Louis area brethren, at the two-guard, where he lined up opposite BB for a fun battle.

Early on, the youngster Tatum had the edge, scoring six first-quarter points. Marcus Morris, twin brother of Washington’s Markieff Morris, added 10 points in the first frame as Boston raced out to a 37-23 lead after the first frame. The Celtics continued to keep the throttle down in the second frame, pushing their lead as high as 20, 51-31, when Tatum drove in for a layup with 6:57 left in the first half, giving the rookie 10 points. However, a strong finish to the frame by Markieff Morris, matching his brother’s first frame, buoyed Washington manageable seven-point halftime deficit.

After the break, it was Bradley’s time. The Wizards All-Star was aggressive. All told he poured in 16 points in the third frame alone, more than tripling his first-half output, and he did it in a variety of ways, be it through repeated drives to the basket, step-back jumpers from the mid-range or taking screens to bury big three-pointers.

After his trey with 4:05 left in the third pulled the Wiz within one, he got the assist on the bucket that pushed Washington to the lead, a bucket by point guard Tomas Satoransky. At the end of the frame, the Wizards held a razor-slim 81-80 lead.

The Celtics regained the lead in the fourth, pushing the gap as high as six points, but when No. 3 checked back into the game, his clutch performance helped bring the Wizards back once more. In the final 3:28 of regulation, the Panda racked up nine points to give the Wizards a chance. Still, the Celtics wouldn’t go away and Washington trailed 106-103 with the ball and five seconds to play. But Jodie Meeks knocked down a clutch three to tie it and the Celtics got a stop at the buzzer to extend the game into overtime.

However, even a single extra session wasn’t enough to decide this one. The teams went back and forth in the first overtime, with Washington holding a lead for most of it, but this time it was Tatum who came up clutch, driving in for a finger roll layup to knot the score at 115 apiece with 3.1 seconds remaining. The Celtics then got a stop of their own to force OT number two.

This time Washington pulled ahead by a bunch, aided by a clutch and-one from BB that pushed the lead to six with 1:25 to go.

Then they simply had to survive a furious finish from Boston to hold on for the 125-124 victory.

“Everybody was tired. You could see I was dog tired. Otto was tired. Everybody was tired, but this is an unbelievable feeling when that clock cans [and] you’re the ones on top,” BB said after logging 47 minutes in the 58-minute affair. “It was just one of those celebrate-inside type feelings while your body is gasping for air.”

This game was in the thick of the playoff race, which added some extra emotion and importance to the contest, especially for Washington who earned the eighth seed in the East. More importantly, this win showed the Wizards they could battle with anyone in the East, even if they faced large deficits and early adversity.