Bradley Beal wasn’t about to let the Washington Wizards fall to 0-3 on the young season. His clutch play with seconds left in regulation in Portland on Monday night assured they wouldn’t.

Brad buried a trey with 7.4 seconds left, then blocked Damian Lillard’s layup attempt on the other end to send the contest to overtime. There it was the Markieff Morris Show, as Washington’s veteran big man scored nine of his 28 points in the extra session to push the Wizards to their first win of the 2018-19 season, a thrilling 125-124 overtime victory over the Trail Blazers.

The Panda flirted with a triple-double, scoring 25 points to go along with eight rebounds and seven assists and no turnovers. John Wall added 16 points and nine assists and Kelly Oubre chipped in 22 points off the bench.

The game went back-and-forth all night long, and Brad was having an all-around solid performance even before his late-game heroics. After a slow start that saw the Wiz fall behind after one, No. 3 got going when he returned to the floor early in the second, hitting his first two shots to help Washington fight back from a deficit that had ballooned to 10 points.

In the process, The Panda ignited a 15-2 Wizards run, which he added to with a three that gave D.C. a 47-46 lead. He totaled 15 points in the second quarter. 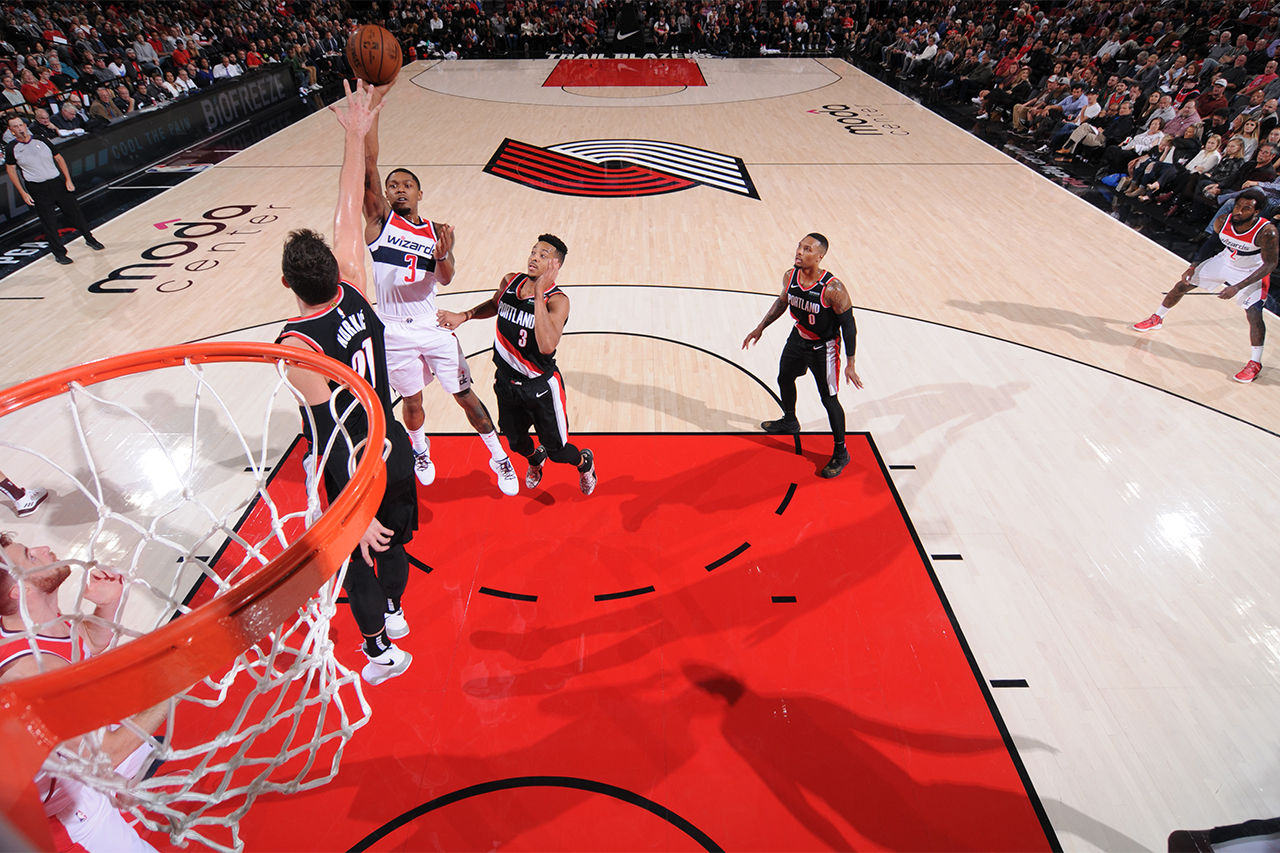 But a pushback from the Blazers had the score tied at 62 apiece at halftime. The ebb and flow continued through the third quarter into the fourth with neither team establishing a lead of more than two possessions. And as time ticked off the clock in the fourth quarter, the game still hung in the balance. In the final two minutes, No. 3 assisted on back-to-back Morris triples, but Portland’s Damian Lillard answered with a couple of buckets to keep the game tied at 108.

Still, Portland was going shot-for-shot with the Wizards and pulled ahead when, with 13 seconds remaining, Lillard found Nik Stauskas for a three-pointer that could have been the dagger, putting the Blazers in front 111-108. The Wizards’ experienced backcourt never panicked, however, and Wall made the extra, unselfish, pass, which freed up Brad to send the game into overtime with his fifth triple on the night.

“We gave up a tough one to Dame. Then CJ made a tough one, and Stauskas made a big three at the end of the regulation, and we were just able to just bounce back from it,” Beal said. “John made a great play, and for some reason, they left me open at the top, and I knocked it down.”

The Panda’s shot, and subsequent block of Lillard to send the game to overtime, energized the Wizards heading into the extra period. But the Blazers backcourt of Lillard and CJ McCollum stacks up with Washington as some of the best in the league, so the Wiz knew Portland wouldn’t back down.

A pair of threes early in the extra session from Morris and Kelly Oubre Jr., put the Wizards in front 117-115. But Lillard and McCollum kept pace and a dunk by Lillard with less than two minutes to play knotted the score for the 23rd time. A three-point play and another trey from Morris put the Wizards up 123-119 as time turned against the Blazers with just 38 seconds to play. Wall then hit a big pull-up, mid-range jumper with 10 seconds to play, which made it a four-point game.

But a fall-away corner three from McCollum cut the lead to one with seven seconds left, giving the Blazers life. Damian Lillard got one last chance to win the game for Portland after a couple missed free throws. However, the Wizards’ defense held up in transition and Otto Porter Jr. sealed the victory by blocking Lillard’s final layup attempt as time expired, and Washington prevailed in dramatic fashion.

“The biggest thing is just getting win, that felt great,” Brad said after the game. “It was fun. Everybody touched it, everybody was involved, everything was clicking on both ends.”

Next up, the Wizards will take on the defending champion Golden State Warriors, so they will look to carry over some of the momentum from this game and try to stack back-to-back wins early in the season.

Tip-off for the game against the Warriors will be Wednesday at 10:30 p.m. ET.