Brad Finds A Groove at The Garden

Bradley Beal got his second game action of the preseason in Washington’s final warmup for the regular season on Friday night at Madison Square Garden and if that 30-minute sample was any indication, Brad is ready to go for the real thing.

No. 3 played 30 minutes and tallied 16 points on 6-of-13 from the field and added five assists, five rebounds in three steals, and although Washington lost the game to the New York Knicks, 105-89, Brad and the Wizards had plenty to build upon as they prepare for their regular season opener on Wednesday at home against the Pacers. According to Wizards coach Wes Unseld Jr., it was Brad’s decision-making on Friday that stood out and gave Washington a lot of positive to look forward to.

“He looked good,” Wizards head coach Wes Unseld Jr. said of Beal. “I was able to push him a little bit and run the bulk of a quarter, try to get him a rhythm. I liked his ability to make plays. They’re going to pack the paint and show him a lot of bodies. His willingness to make the right play, I like to see that. It’s a sign of trust with his teammates, even when shots don’t fall. It’s going to happen some nights. But he tried to play the right way and make the right read every chance he got.

The opening quarter of the game was dominated by New York, as they jumped out to an early 12-2 lead and pushed it to 23-5 before the Wizards finally got going. Brad got his first points on a layup with just under five minutes to go in the first and added two more a few moments later on a reverse off a feed from Johnny Davis. The surge by Washington late in the quarter allowed them to cut a nearly 20-point Knicks lead down to just 11, and they trailed 30-19 after one.

By the time No. 3 returned early in the second, the deficit had been cut to single digits and he went to work facilitating for his teammates. First he found Rui Hachimura cutting to the basket for a layup 34-27. Moments later he found Rui for a trey that made it 36-30. Next, it was Brad’s turn to put the ball in the bucket as the Wizards continued their excellent ball movement in the second and Monte Morris got it to Brad for a finger roll that made it a four-point game. When Brad was fouled a couple plays later, his two free throws made it a two-point game.

He added another free throw on a split trip to make it a one-point game and when Kyle Kuzma made 1-of-2 at the 4:55 mark, the game was tied at 36-36. However, New York closed the quarter on a 16-6 run, despite another bucket from Brad on a stepback, and took a 10-point edge into the break. 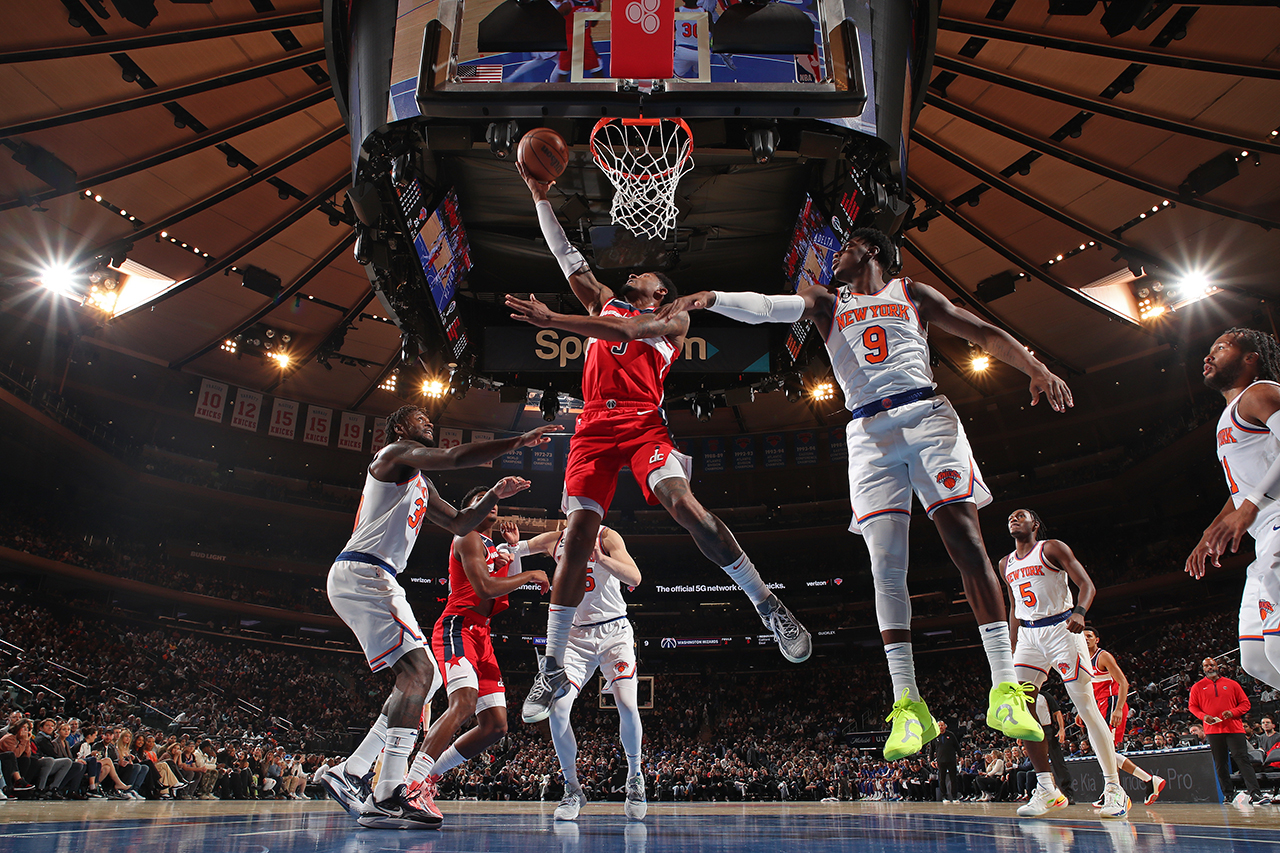 After playing 18 minutes in the first half, Brad played the entire third quarter and chipped in five points, three assists and two steals as the Wizards and Knicks traded barbs. New York actually continued their run to end the half at the start of the second half, scoring the first eight points unanswered to push their lead back to 18. Washington finally broke the ice when Brad dished to Kuzma for a quick look from seven feet to get the Wiz on the board for the first time in the second half. Later, he found Will Barton for a trey, but the Knicks answered and got their lead up over 20 points, 73-50.

However, Washington scored the next 11 points and Brad was a big part of the run. He found Delon Wright for a three early in the run, had two steals that led to buckets and added a pull-up of his own to cut the deficit to 12. In the closing moments of the third, Brad hit his first and only three of the night which made it a 81-72 game.

After an Obi Toppin dunk on the other end, Brad nearly beat the buzzer with another trey but missed, and Washington was down 11 after three.

Brad checked out at the end of the third and didn’t return as reserves carried the game to the end on both sides.

Washington finished the preseason with a record of 1-3 that isn’t completely indicative of their growth as a team. They now head into the regular season looking to re-establish themselves among the playoff contenders in a crowded but competitive Eastern Conference.

The regular season tips off on Wednesday evening in Indianapolis as the Wizards take on the Pacers at Gainbridge Fieldhouse. Tip-off is slated for 7p.m. EST and the game can be seen on NBC Sports Washington.