No. 3 Shines in Win Over Orlando

The Orlando Magic had the Washington Wizards on the ropes Sunday in D.C., but Bradley Beal teamed up with another Washington BB to make a double-digit fourth quarter deficit disappear on the way to a win.

Brad led all scorers with 32 points on 12-of-21 from the field, knocked down 3-of-5 attempts from deep and all five of his free throws. He also tacked on four assists, three rebounds, two steals and a block to stuff the stat sheet in his 40 minutes of action.

Meanwhile, D.C. newcomer Bojan Bogdanovic, acquired from the Brooklyn Nets at the trade deadline, poured in 27 points on 9-of-11 from the field and a ridiculous 8-of-10 from three-point range, including two treys in the final 66 seconds to help the Wizards escape with a 115-114 win over the Magic. After the game Bradley, a 40 percent shooter from deep this year himself, said he was impressed by Bogdanovic’s precision from beyond the arc on Sunday.

“He’s making me feel bad, man, shooting them threes, shooting 10, he made eight. But we need him to continue shoot to the ball. He’s a great scorer, we’re happy to have him and he was definitely a big key to our win tonight.”

WIZ RESPOND AFTER POOR FIRST HALF

Sunday’s game didn’t get off to such a hot start for the home squad. Brad connected on his first two attempts of the game, but the rest of the team started cold and Orlando took an early lead. Then things went from bad to worse when, on a long two-pointer that briefly gave Washington a 17-15 lead, Brad landed on the foot of Orlando defender Terrance Ross and got up limping.

Shortly thereafter, BB, who scored nine of Washington’s 25 first quarter points, had to check out of the game and head to the locker room. He returned to the bench to start the second half, but by the time he got back into the game three minutes into the second quarter, the Magic had pushed their lead to double digits. No. 3 did his best to both overcome the injury and keep his team in the contest while manning the second unit. His bucket with 3:30 left in the half cut the deficit to single digits, but Orlando went on a 11-4 run from there, and at halftime their lead was 16. In the locker room at the break, Washington coach Scott Brooks challenged his team, and as Brad recalled afterward, the message resonated.

“He made it very clear what he wanted out of us and we just looked at ourselves in the mirror and gave him different results in the second half,” Brad said. “We just wanted to come out and get stops and we did a great job of that in the second half.” 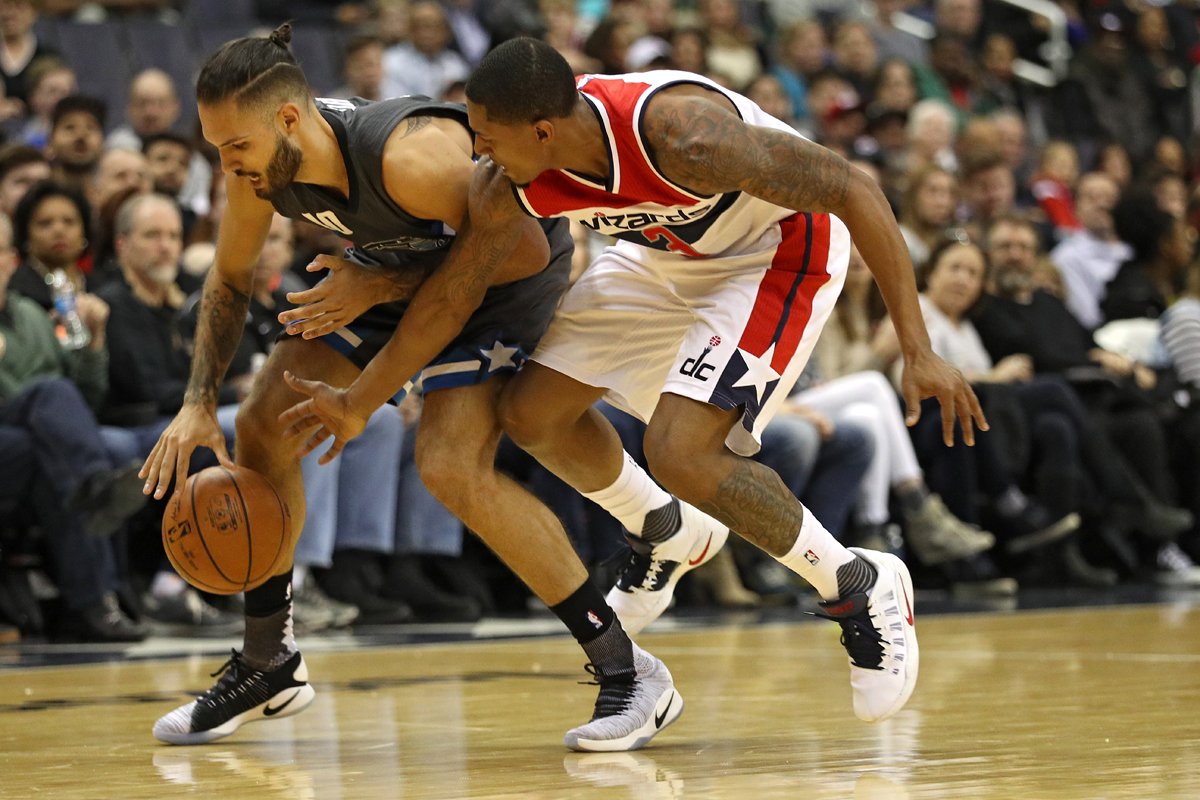 Coach Scott Brooks called for the Wizards to be better on defense in the second half and they responded (Getty Images).

Indeed, the Wizards buckled down on defense in the second half, limiting an Orlando team that shot nearly 60 percent from the field in the second quarter to 46.5 percent in the second half. Meanwhile, the offense turned up and Brad was a key contributor to that as well.

After starting out hot, then getting injured and tallying just two points upon his return in the second frame, Brad started to feel it again midway through the third. His back-to-back buckets just ahead of the eight-minute mark made it a 10-point game and he followed with a trey with just under six minutes to go in the third. However, Orlando seemed to have an answer to every bucket. BB finished the quarter with 12 points to bring his total to 23 for the game, but Washington was still down double digits, 90-79 after three.

With one quarter left to come back and pick up a much-needed win, Washington turned it up another notch in the fourth.  Two minutes into the frame, Bogdanovic drilled a three to make it a seven-point game. Two minutes later, the sharpshooter buried another and suddenly, thanks to his shooting and lockdown defense, the Wizards were within two points with seven minutes to play. John Wall briefly gave Washington the lead with a three-point play with under seven to go, and the teams traded salvos from there. When Brad connected from deep with 5:15 to go, it knotted the score at 100-100.

The trading of baskets continued down the stretch, as No. 3 started to heat up. Evan Fournier hit a three to put the Magic up 103-100, and BB answered with a drive for two. After another Orlando score, Brad dished out to Bogdanovic for a trey to knot it at 105. The Magic answered with a triple from Ross and Brad scored on the ensuing Wiz possession to once again make it a one-point game.

He added a pair of free throws to once again pull Washington within one with 1:47 to go. A miss at the free throw line by Orlando’s Bismack Biyombo opened the door for the Wizards and after a long possession that included two offensive rebounds and a timeout to regroup, Bogdanovic kicked it in with a trey to put the Wiz in front.

A miss at the free throw line by Orlando’s Bismack Biyombo opened the door for the Wizards and after a long possession that included two offensive rebounds and a timeout to regroup, Bogdanovic kicked it in with a trey to put the Wiz in front. Fournier responded with a three-point play to again stake Orlando to a two-point lead with under a minute to play, but on the other end Bogdanovic buried another dagger, his eighth trey of the night, to give the Wiz the lead for good.

They got two huge stops on defense to finish the game and carry all-important momentum into their forthcoming road trip. 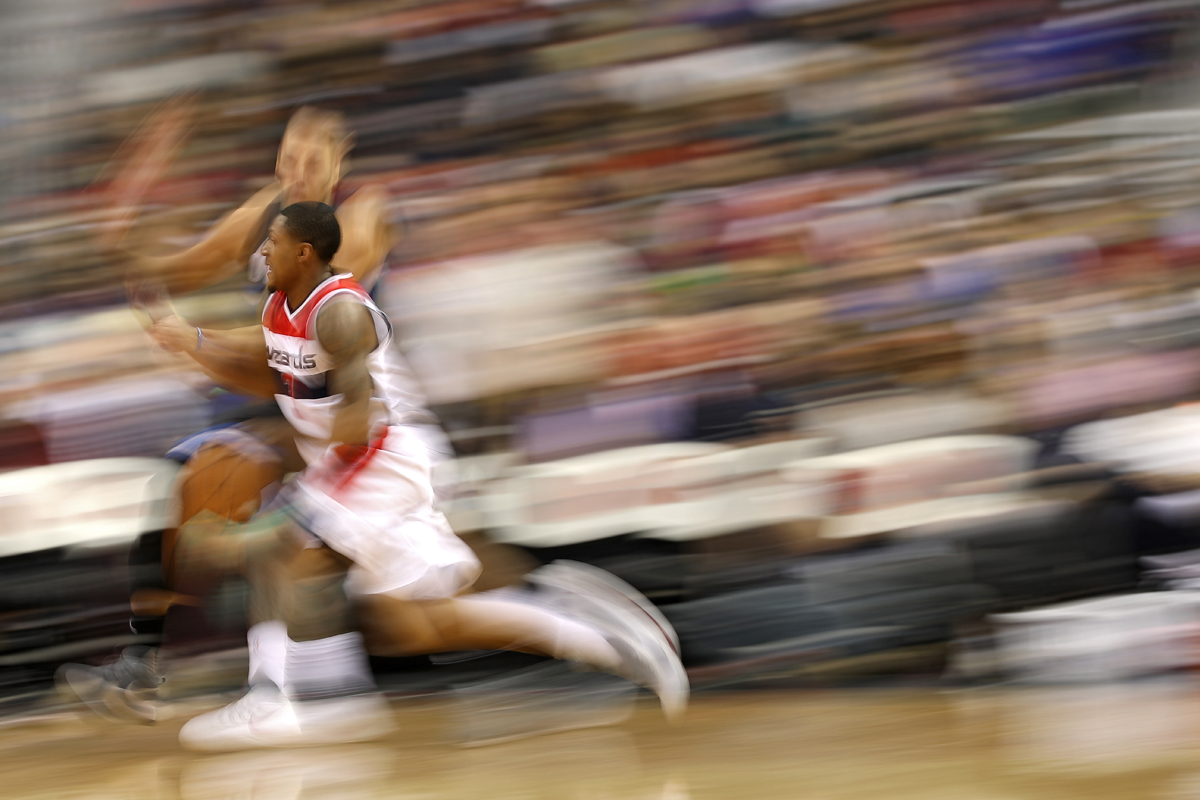 Despite an ankle injury suffered in the first quarter, Brad tallied 21 second half points to help Washington come back and win (Getty Images).

Afterward, Brad said the come from behind win was a sign of how far the Wizards have come this season.

The Wizards hope they did just that on Sunday.

Beal looked like D-Wade in his prime again on this one… https://t.co/4Lu7eYHAZD

Beal came down on his defender's foot. Left for locker room #WizMagic #ORLatWAS

Beal is 9/15 FG for 23 points, keeping the Wizards within striking range.#WizMagic

Bradley Beal's impressive 30-point game will be overshadowed a bit by Bojan's 8 threes, but man Brad is killing it. #WizMagic #dcfamily

The Wizards hit the road and head out West to start a five-game trip that will test their mettle.

The trip begins in the desert of Phoenix on Tuesday. BB and the boys will take on a Suns team that has scuffled through this season overall, but has begun the month of March hot, with three straight victories including an upset win over fellow Eastern Conference contender Boston on Sunday.

However, Brad will certainly be looking forward to seeing the Suns again. The Wiz last met Phoenix on November 21 in D.C., a 106-101 Washington victory that saw No. 3 pour in a season-high 42 points on 14-of-22 from the field and 5-of-10 from long distance. He also got to the line early and often, knocking down 9-of-11 from the stripe and chipped in four rebounds to the winning cause.

Bradley and John Wall will be matched up against another one of the league’s most dynamic backcourts in Phoenix’s Eric Bledsoe and Devin Booker. That duo combined for 59 points the last time the two teams met and both are averaging over 20 points per game for the season.

Tipoff from Phoenix’s Talking Stick Resort Arena is set for 9 p.m. ET and the game can be seen on Comcast Sportsnet Mid-Atlantic.