Welcome to the first blog post on my new web site. I’m excited to be doing this, and to be giving you my perspective on how things are going on the court and off it on a regular basis. In the future, I’ll be writing about everything from the influence of my family to causes that are important to me, as well as answering questions from all of you.

But for this first entry, I want to talk about how things have gone this season so far—the best season I’ve experienced since reaching the NBA.

Everything changed this year with the arrival of our coach, Scott Brooks. Ever since he got here, the culture has been different. Everything he does is about our team, our family. Win, lose, or draw, it’s always a collective effort. I know that sounds like something everyone says their team believes in, but it’s one thing to say it, and it’s another thing to live it.

With Coach Brooks, it’s never been about one player dominating the game, or winning us a game. There’s no favoritism for any of us. We’re all being held to a high standard, and knowing that has actually given all of us confidence. Coach trusts us all with the same responsibility, from the top down, and it’s spread throughout the players, too. The team atmosphere is great. It’s a family, brother-like atmosphere.

Coach also changed our approach to the game in terms of our team’s work ethic. Guys have been working hard on their games, competing about everything. Sometimes, we fight to see who’s going to get to the gym first. (Except the rookies—they have to be in there before anybody.) We’re constantly challenging each other, and that makes us all continue to get better, and want to improve.

On top of all that, things have been fun. We enjoy each other’s company. We enjoy our camaraderie, and again, Coach has been responsible for a lot of that, too. 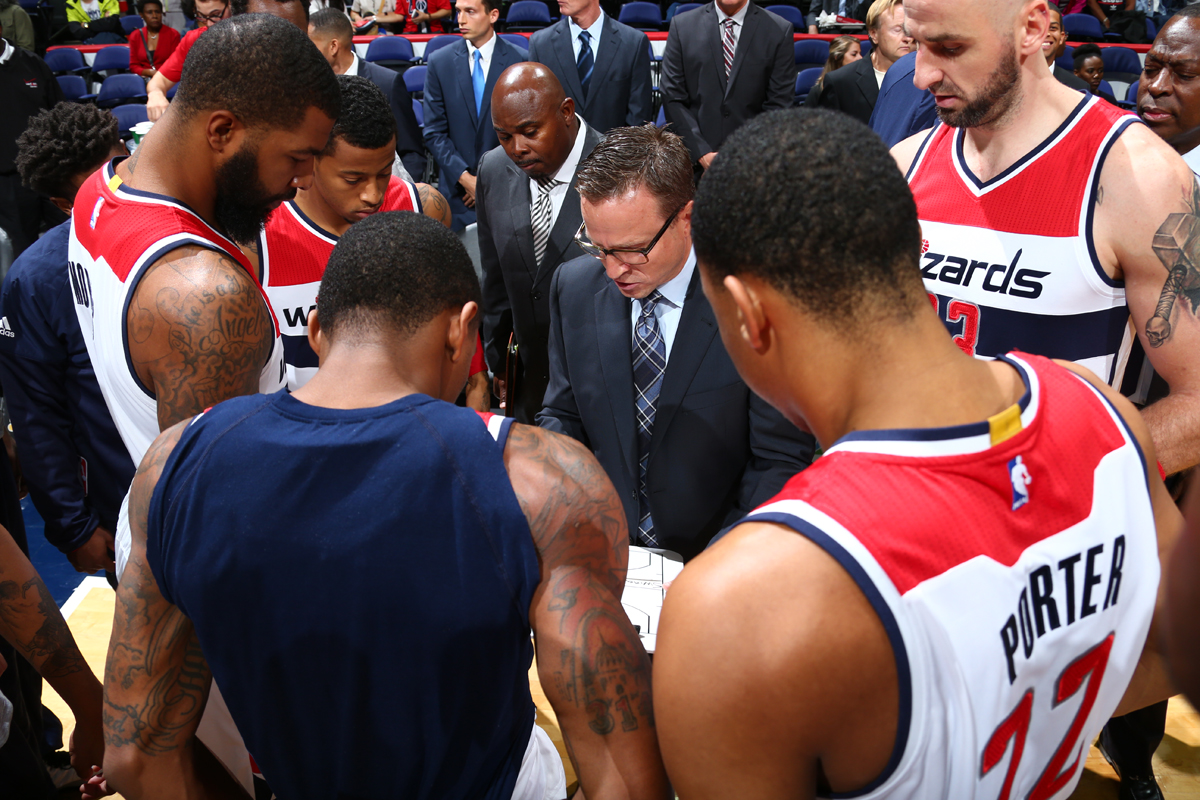 Coach Brooks has changed the culture of our team and it feels like a family (Getty Images).

In terms of me personally, Coach Brooks has been tremendous. He’s done a lot with my growth and my approach to the game. He is such a great player’s coach. He gives you confidence on the offensive end, but at the same time, he constantly wants you to improve your game. He’s not afraid to jump on your butt every now and then, and demand more out of you. We’re always all ears whenever he’s talking. Everybody is focused on him and listening, and he has a big impact because he played in the league, and knows the game. It’s easy to relate to him.

He’s really encouraging, too. We played against Cleveland back in early February and lost in OT, and I scored 41 points. Two days later, we won in OT against Brooklyn, and I had 31. Afterward, he used those games as an example for why I needed to stay aggressive.

“Never change your mindset or your approach to the game,” he said. “Whatever you’re doing, keep doing it.”

He made a bet with me at the start of the year that I won’t shoot 20 threes in a game. Like, he actually wants me to shoot 20 or more threes, and if I do, he wins. So that’s just one example of what I mean when I say he believes in us as players.

For me, the biggest changes in my performance have come from three things. First, I’m more confident in myself. I believe in my game. I believe in the work that I put in this past offseason. It’s really helped me out a lot—constantly getting in the gym, watching film, and doing whatever it takes to get better. Then two, being 100% healthy—not having to worry about any injuries or anything lingering that could constantly harm me or keep me from playing at a high level—that’s been great. I’ve been able to play freely, and go out there and show people what I’m capable of doing.

Finally, it’s my fifth year in the league, and I feel like a more mature player. You get older, and the game slows down for you. It’s kind of like it’s a natural feel. I know I can always get better, but on top of that, I know I have all the tools that I need to compete at a high level, and compete with the best players in the league.

Maturing has had a big impact on how John Wall and I play together, too. We’ve both grown—in our mental approach to the game, our intellectual approach to the game, and how we relate to each other. We both understand that the team won’t be successful unless we’re on the same page, and that’s where we are now. With time, we’ve gotten better and better, and as a backcourt, we feel like we’re second to none. We know where each other’s spots are on the floor. I know where he’s going to be in the flow of the offense. He knows where I’m going to be. Everything just naturally flows, and on top of it, we’re both having career years. We’re constantly getting better, and challenging each other to be the best we can be.

Coach trusts us all with the same responsibility, from the top down, and it’s spread throughout the players, too. The team atmosphere is great. It’s a family, brother-like atmosphere.
— Brad on Coach Brooks

One of things I’ve come to really appreciate is John’s basketball IQ. It’s tremendous, and I don’t think he really gets a lot of credit for it. People see his assists, and they’re like, “Oh, he has a lot of assists.” But the way he has them and the way he gets them, he does an amazing job of just setting guys up. Whether it’s him flying down the court in transition, or whether it’s him just having a great bounce pass in a half-court set, he doesn’t get recognized for how great his passing ability is, or his ability to get his teammates shots.

Off the court, John is a super fun guy to be around. Sometimes, he seems like this bashful superstar, but when we’re out at dinner or on the team plane, he’s one of the most talkative, outspoken guys you’ll ever meet. He enjoys his friends. He enjoys company. And whenever he has music on—right now, he loves Lil Wayne, Future, Migos, and his nephew, WallWay Pack—his energy level is off the charts.

But I think he has the most fun whenever he is with his teammates. On the plane, me, John and Markieef Morris play a lot of booray. (Everybody has their day, and everybody has their bad day, in case you were wondering who wins the most.) But whenever we’re on the road—whether we’re out shopping or at the movies or dinner—John encourages us all to be together. That’s just the type of guy he is. He’s like a big brother to everybody.

When you look at the year we’re having so far, it’s really hard to point to any one guy as the reason we’ve been successful. I can go down the line and name pretty much everybody, because everybody is having a really good year. Marcin Gortat averages a double-double a game, and sometimes, I don’t think he gets enough recognition for that. He grabs 10-plus rebounds every night, and can finish in the paint whenever he has the ball. Plus, he can take a pass to the face from point blank better than anyone else in the league. Kieff doesn’t get a lot of recognition, either, and he’s also been tremendous, the way he’s been scoring the ball. Otto Porter, the same thing—he’s having a career year.

But like I said, it’s taken all of us. 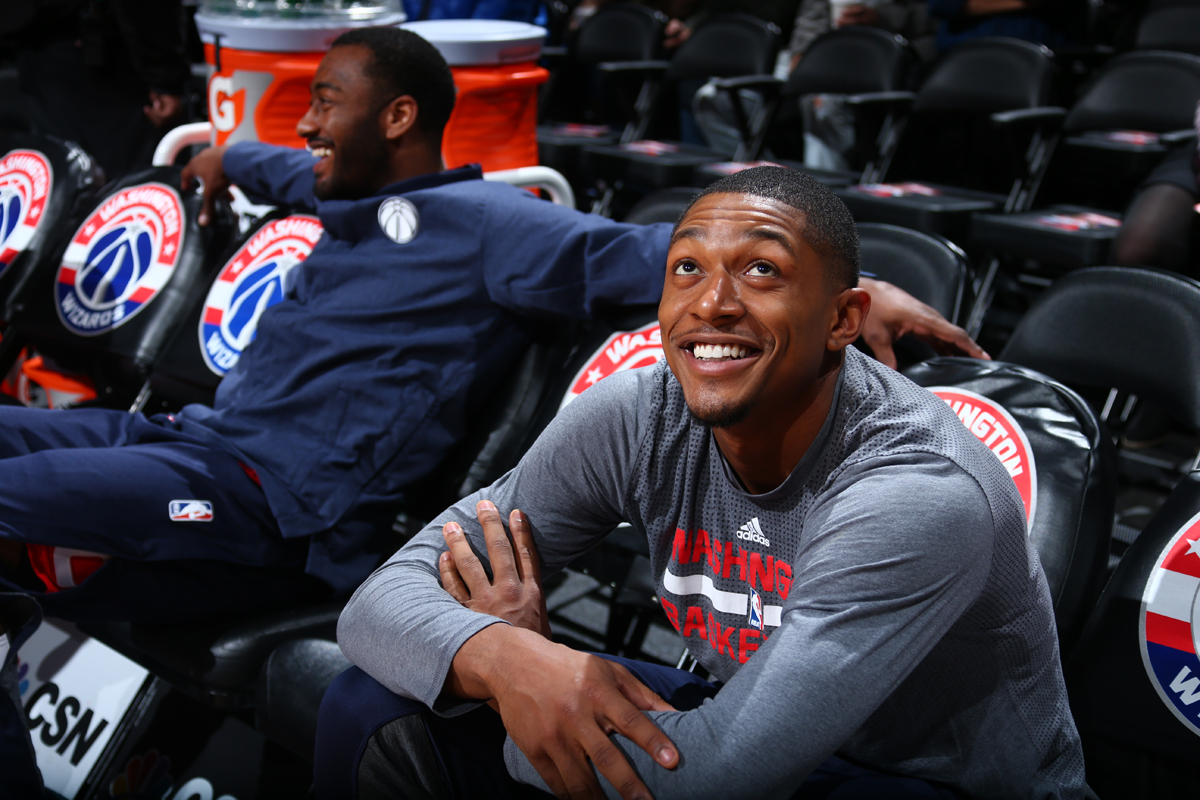 John Wall and I have both grown as players, teammates and friends and it’s paid off in career years for both of us (Getty Images).

We picked up a couple guys recently that should help us a lot. Bojan Bogdanović is a scorer, and he showed that against Orlando the other night. We just tell him, ”If you’re open, you knock it down,” and he does that. He has a big body, and he’s able to switch from defense and help us out on the glass, too, which should make things a little bit easier for us. Brandon Jennings is a good addition, too. He’s a fierce, feisty guard, and I think he’ll definitely intimidate point guards on other teams. He’s shown what he’s capable of doing—that he can score consistently—so I think he will help us out a lot in that category, and in getting guys good looks on the offensive end, too.

We kind of stumbled out of the All-Star Break with losses to Philly and Utah, games where we should have come out more focused and ready to go. We had a big opportunity to get our mindset back going in the right direction against Golden State, and were really locked into that game and getting the victory. Then we followed that up with wins in two of our last three games.

The biggest takeaways from both games for me was that our defense was back. We’ve taken pride in our defense all year, and no matter who we’re going against, we have the mentality that we’re going to shut you down. It’s not easy to do that against the best teams in the league—especially a team like Golden State—but we managed to get stops when it mattered most.

We feel like we stack up pretty well against anyone in the NBA. We’ve shown that we can compete against the Cavs, against Boston, and against the top teams in the West. Now, it’s a matter of us keeping it going, and finishing out the season strong so we set ourselves up for a playoff run.