The playoffs have arrived for Bradley Beal and the Washington Wizards.

Starting Sunday, the fourth-seeded Wizards will begin their first round Eastern Conference matchup with the fifth-seeded Atlanta Hawks.

Anticipation in the Capitol is high. As the Washington Times explained, it’s been a very long time since the city has seen a winner. A very long time. So long, in fact, that Brad couldn’t believe it.

No Washington team among the big four pro sports has won a championship since the 1991 Washington Redskins. No one in that group has been to a conference final since the Capitals made it to the Stanley Cup Finals in the 1997-98 season.

He thought about it for a second while people clicked pictures of him standing in a grimy alley, fatigued from a lengthy regular season that just ended with a plane ride home from Miami the night before. Wall and Beal are operating in a city that anticipates postseason downfalls. In the shadow of their vinyl likeness, they thought about the legacy of sports losing in America’s power center. Can they break it? Will they be swallowed by it? Damnation can’t be eternal, can it?

The Wizards won the season series this year against the Hawks, 3-1. After a loss on opening night, Washington turned things around to win the final three meetings against their playoff opponent. Brad has season averages of 21.8 points, 3 rebounds and 3.3 assists against Atlanta this year. Those numbers are just about equal to his season long averages, so he will look to keep up his steady play in this series.

According the Washington Post, the matchup favors the Wiz because Atlanta lacks the personnel to stop No. 3 and Co.

BB has previously been to the playoffs twice in his short NBA career, both in 2013-14 and 2014-15. After not qualifying last season, he is eager to be back in the playoff picture and improve upon his postseason play. BB has playoff averages of 21.2 points, 5.2 rebounds, 4.6 assists, 1.6 steals and 41.4% from the field. Going into a series that is bound to be hard-fought against the Hawks, the Wizards will need playoff Brad to be on his A game. 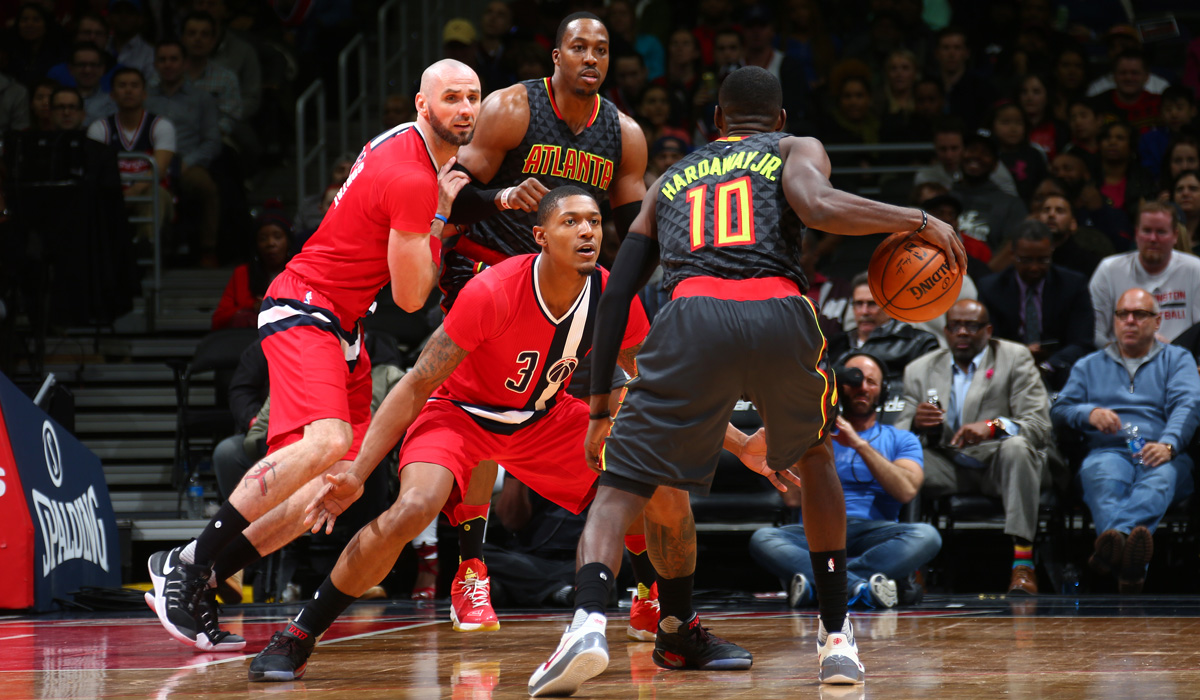 Brad playing defense during a win over Atlanta on March 22.

No. 3 has made a strong case for this season’s Most Improved Player award. With career highs in points, assists, free throw percentage, field goal percentage and most importantly games played, The Real Deal has solidified himself as one of the top shooting guards in the NBA. Career years for John Wall and Brad have the Wizards as one of the most dangerous teams heading into the playoffs.

All of that said, none of it means anything if the Wizards can’t deliver when it counts. As Brad told the Washington Times:

“Man, we owe this city,” Beal said. “That’s what goes through my mind. We definitely have to do whatever it takes to get some type of championship or success back in the city. Not even just for them, but for our organization. We hadn’t won our division in a long time. We made some strides, we accomplished some goals, but we still have a lot to prove and a good opportunity to do it.”