After just one day of rest following an emotional series win over the Atlanta Hawks, Bradley Beal and the Washington Wizards moved right on to Game 1 of what is sure to be another battle against the top-seeded Boston Celtics.

Brad earned all 27 points going toe-to-toe with Celtics guard Avery Bradley. No. 3 went 9-of-19 from the floor, adding four assists, one rebound, one steal and one block in 40 minutes. And after Washington’s 123-111 loss at the TD Garden, The Real Deal came away complimenting his counterpart, Bradley.

“He’s really good,” Brad said. “He’s a great defender, he has a knack for the ball and you can’t mess with the ball when he’s guarding you, you have to keep things simple. He does a great job, moves his feet, plays great defense with his hands, uses his hands a lot and you respect it… Defense, that’s his best attribute and he’s gonna continue to be aggressive but we’re gonna continue to be aggressive right back.” 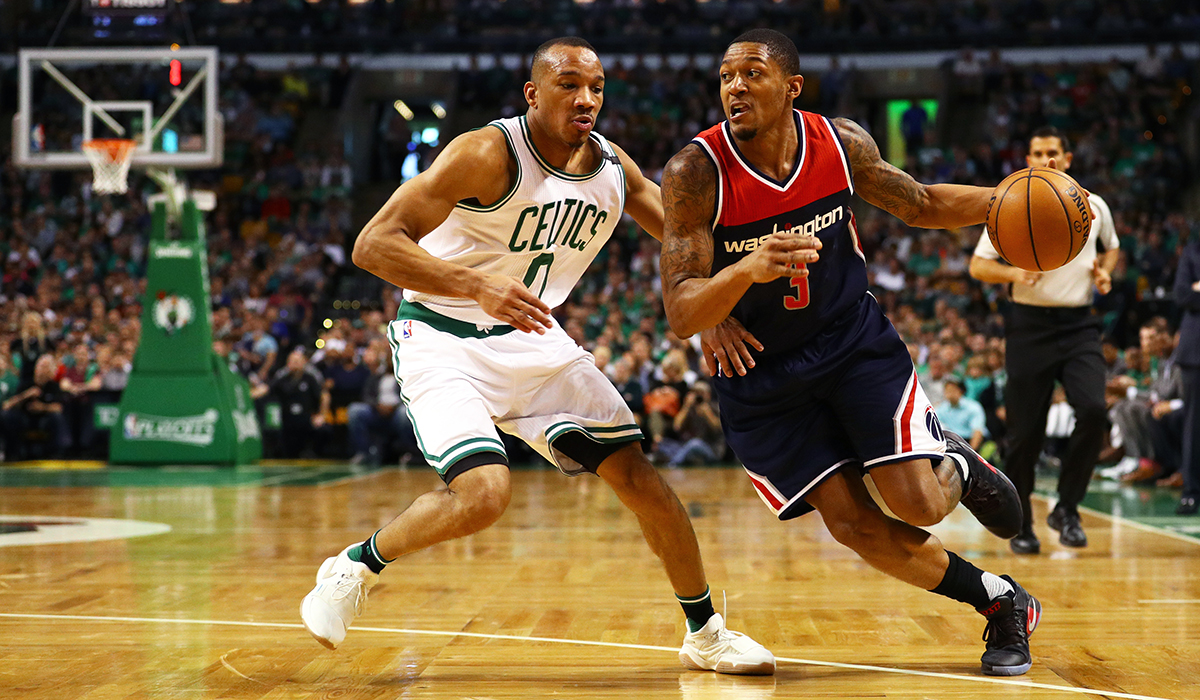 The Wizards opened this game hot, starting on a 16-0 run highlighted by Brad hitting a trey, cutting inside for a layup and dishing to Marcin Gortat for a push shot to force an early Boston timeout. Brad ended the quarter with one of his patented midrange jump shots as Washington held a 14 point lead after 12 minutes in Boston.

No. 3 bookended the second quarter with a driving layup and a corner three in a period that saw Boston cut the D.C. lead to just five heading into halftime.

Early in the second half, BB hit his lone bucket of the third quarter on a smooth midrange jumper off a screen. The third quarter was the turning point in this game and Brad discussed why after the game.

“They were a little bit more aggressive than we were, I think our defense slipped a little bit,” BB said of the troublesome third period. “We lacked a little IQ and a little focus, we gave up a lot of threes. They made 19 threes today, so that’s just way too many to give up. The chances of winning that game are very slim when that happens so we gotta do a better job of guarding the three, getting to our guys and being on the same page defensively.”

In the fourth quarter, The Real Deal stepped up for the Wizards. With 9:45 to play, he banked in a jump shot while getting fouled by Terry Rozier and completed the and-one. Later in the quarter, the former Florida standout traded threes with the Celtics, matching them twice in a row to keep the Wizards within striking distance. However, another stunning, inspired performance by Isaiah Thomas of the Celtics, just the day after his sister’s funeral, was the difference, as the Celtics ran away with it late and took Game 1.

Bradley Beal is a walking bucket.

Bradley Beal is the version of me who made it

#wizards Bradley Beal with back to back 3's!!

Bradley Beal is on a mission

Bradley Beal is the truth man.

D.C. will stay in Boston for Game 2 against the Celtics on Tuesday, May 2.

Brad and the Wizards will look to steal a game on Boston’s home court and take home court advantage in this series.