Bradley Beal and the Washington Wizards fought off elimination with a win on Friday night in an entertaining showdown with the Boston Celtics, 92-91 in Game 6. The win sets up a deciding Game 7 back in Boston to advance to the Eastern Conference Finals.

Brad scored a game-high 33 points on 15-for-26 shooting and dished out five assists while grabbing two rebounds and one steal.

“I didn’t know they [the Celtics] wore all black today, but it doesn’t faze us,” Beal said. “It is what it is, they came in and they played hard, I don’t take anything from them, they did a good job of competing. But we had a will to win, we did whatever it took. We stayed the course of the game with the last two three minutes we stayed locked in regardless if we were up five, down seven, however much we were down we did a good job of just locking in and we both [John Wall] made some big plays down the stretch. We’ve wanted to get past this point for a long time. We didn’t want to go home on our own floor and we just wanted to give ourselves another chance and we got that so we got to take full advantage of it.” 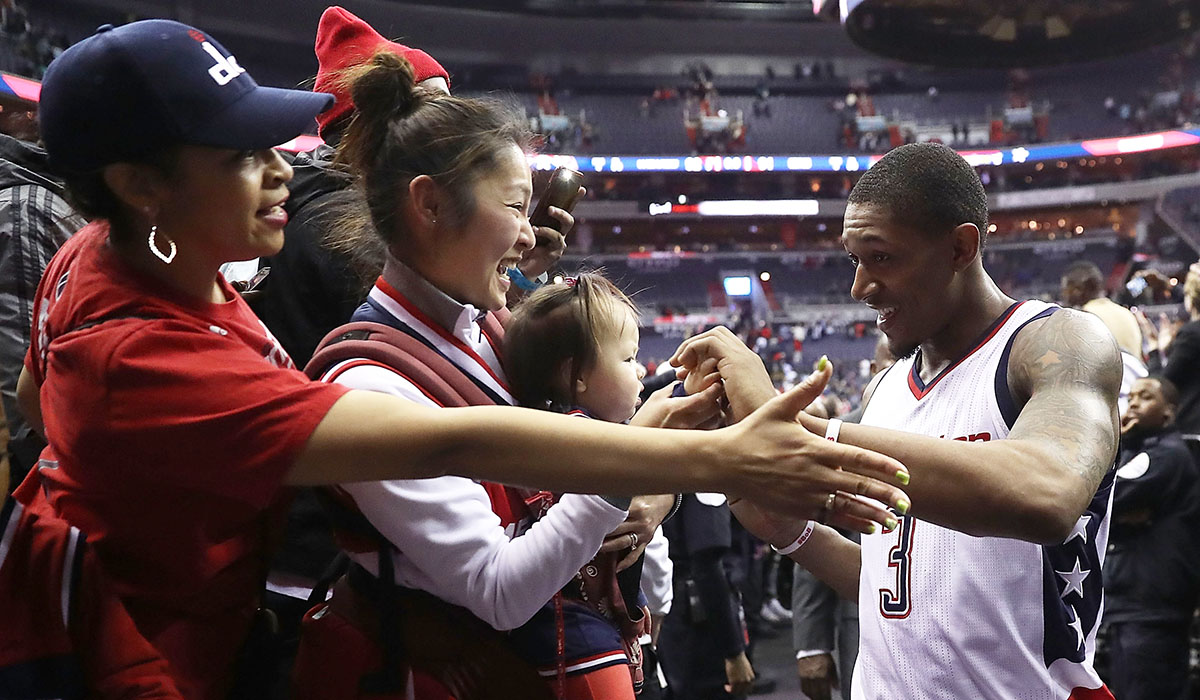 Brad hit his first bucket of the night on a floater in the key, then added a midrange jumper and a gorgeous reverse layup after blowing past his man baseline as Washington lead by five after one.

In the second, BB hit a pair of step-back jumpers over Jae Crowder and Kelly Olynyk before finishing a layup that fueled an 11-2 Wizards run. At the half, the Wizards were within a point of the Celtics and the back and forth game was already brewing.

After the team struggled to open the third quarter, the Real Deal Beal dished a beautiful crosscourt pass to John Wall for a layup in traffic before continuing his midrange excellence with a bank shot over Al Horford. Brad then got to the cup to lay it in, finished a 2-on-1 fast break with a dime to Markieff Morris and then beat his man baseline again for another layup before the quarter was all said and done.

In the final quarter, BB turned his game up another notch with 13 of his 33 points coming in the final frame. With just over 10 minutes to play, he finished tough layups in traffic on back to back possessions to give the Wizards a one-point lead. Next, Brad used the baseline yet again to finish a crafty reverse layup and continue to exploit the Celtics’ lack of defense on the end line and then gathered an offensive rebound and turned it into two more points on a push shot in the lane. With 3:45 to play, BB found a wide open Morris in the corner to bury a three to put Washington back ahead. After some clutch buckets by Isaiah Thomas on the other end, No. 3 was able to drain his only trey of the night to cut the Celtics lead to two with just over a minute remaining. After Wall free throws tied the game, Avery Bradley hit a jumper to push Boston back in front by two so the Wizards went to Brad on the next possession and he delivered a

After some clutch buckets by Isaiah Thomas on the other end, No. 3 was able to drain his only trey of the night to cut the Celtics lead to two with just over a minute remaining. After Wall free throws tied the game, Avery Bradley hit a jumper to push Boston back in front by two so the Wizards went to Brad on the next possession and he delivered a game-tying runner with 28 seconds to play. Horford proceeded to bank in a midrange jumper to take back the lead and John Wall would not be denied a Game 7 as his game-winning three finally ended this classic.

After the game, Wall and Brad were asked if it was fitting that this series is going seven games given the back and forth nature of the matchup all season and both players just nodded in agreement. Brad added, “It’s gotta go seven.”

My guy Bradley Beal, in a must win elimination game had 33 and 5 with numerous clutch shots/plays. Best 2 guard in the league this season.

Bradley Beal kept the Wizards in that game

John Wall deserves the credit for that shot/that second half, but also: one time for Bradley Beal. Carried the Wiz through real dicey times.

Just in case you needed an angle of Bradley Beal learning John Wall jumped on the scorer's table with his entire bewildered face. #Wizards pic.twitter.com/lZFKuamB2O

D.C. will travel back to Boston for a decisive Game 7 against the Celtics on Monday, May 15.

Brad and the Wizards will look to extend their playoff run to the Eastern Conference Finals against the defending champion Cleveland Cavaliers with a victory over the Celtics. To do so, they’ll have to win on the road, something neither of these two teams has done against each other this season. The other question to answer on Monday: which team will wear all black?