The Washington Wizards split a pair of matchups this weekend behind two impressive performances from Bradley Beal. On Friday, the Wiz dropped a 129-119 contest to the Utah Jazz despite a dominant 42-point, 10-assist double-double from the Panda.

Beal and his teammates responded on Sunday in the right way, coming away with a convincing 124-110 victory against the Golden State Warriors. Bradley put up 34 points in the win, breaking yet another Washington Wizards franchise record in the process.

Beal has now scored 25-plus points in 18 consecutive games, after tying Walt Bellamy on Friday and surpassing him on Sunday for the longest such streak in franchise history. His performance against the Jazz was his tenth 40-point game this season. Additionally, Friday’s game was the third of Beal’s career with at least 40 points, 10 assists and five rebounds. 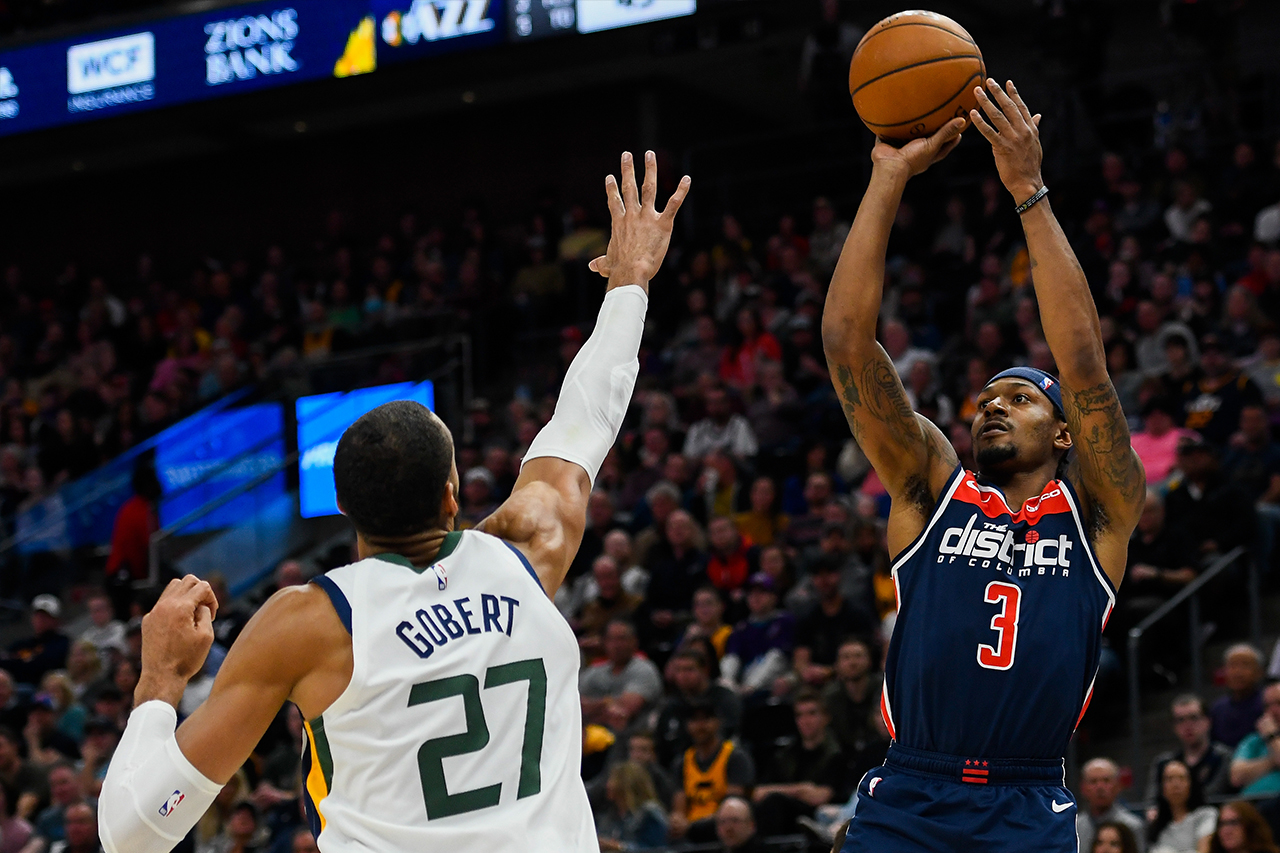 He is the only player in franchise history with multiple 40-10-5 games. Beal scored his 25th point of the night on a put-back layup less than a minute into the second half, giving him at least 25 points for the 17th consecutive game, tying Walt Bellamy for the longest such streak in franchise history – a record that has stood since 1962.

From an offensive standpoint, BB had every type of shot working for him in Utah as he continued his scorching offensive run that has spanned the last several weeks.

“In the first half we did a really good job defending,” Beal said postgame in Utah. “I think on both ends we played really good. I think third quarter – they’re a good team, so they’re going to take care of the ball. They’re going to go in the rim. I think we kind of let their run get out of hand a little bit late in the third.”

Despite facing a 15-point deficit early in the final frame, the Wiz fought back, authoring a 14-2 run capped by a Beal three with 5:18 to go cut the Jazz lead to three points. That turned out to be the Wizards final punch as Utah ripped off a 15-5 run of their own in just two minutes to seal the win.

On Sunday, Bradley and the Wiz rebounded with a convincing win out in the bay area, defeating the Warriors by double-digits at the Chase Center.

Once again, it was clear BB was a man on a mission out there on the hardwood. Beal broke a 58-year franchise record against Golden State as the Wizards topped the Warriors by 14 on the road.

Bradley’s big night started from the jump. He scored his first points of the night on a triple less than a minute into the game, his first of five consecutive made threes to start the night. Beal tallied 22 of the Wizards’ first 32 points of the game and led Washington to a double-digit lead it held for the majority of the first quarter.

Davis Bertans owned the second half, helping Washington turn a four-point lead into a 21-point lead in the third quarter. Bertans finished with 29 points on 9-14 (.642) from the field and 8-10 (.800) from beyond the arc, becoming the ninth player in the league with multiple games with eight-plus threes this season.

Beal and Bertans became the first teammates in franchise history to hit at least seven threes in the same game.

After a back-and-forth second quarter, Bertans and Rui Hachimura took over in the third quarter, combining for 18 of Washington’s 31 points as the Wizards pulled away for good. The pair scored 16 of the Wizards’ 18 points in a four-minute span.

In the final frame, Bertans put on a clinic from long-range. – shooting a perfect 5-5 from three-point range to help the Wizards extend their lead and earn a victory.

As for No. 3, in the second half he proved that he can also contribute on the defensive end – stealing the rock and turning it into points at the other end.

Picked his pocket ➡️ Got the bucket! pic.twitter.com/CoeTVtkWPm

Next up, the Wizards will continue their four-game road trip out West. Washington will have Monday off before a Tuesday-Wednesday back-to-back against the Sacramento Kings (26-34) and Portland Trail Blazers (26-35).