A Season of Progress

A few days ago, I wrote about our playoff journey and how it’s going to help us grow. Now when it comes to our season as a whole, I do think it went really well. No, it definitely didn’t end up where we wanted it to, but we made a lot of strides this year.

There are a lot of positives that we can take out of it as a young core moving forward together.

One of the biggest changes this year was with our leadership, and that started right from training camp. We didn’t really have those veteran leaders that we had in the previous years—guys like Paul Pierce, Trevor Ariza and Nene who had been here before, true vets.

John Wall and I were forced into those roles over the offseason, and throughout the year, we grew into being leaders of the team. We had to be vocal. We had to get out of our comfort zone a little bit. Looking back, I feel like we both grew lot. We held each other accountable. We knew that we had to bring it each and every night.

John was terrific all year. He’s our point guard and our general, and our relationship is better than it has ever been. I think all the negativity at the beginning of the year actually brought us closer. We wanted to prove to people that they were wrong, and that there were no issues between us. There was no beef. We need one another in order for this team to be successful. 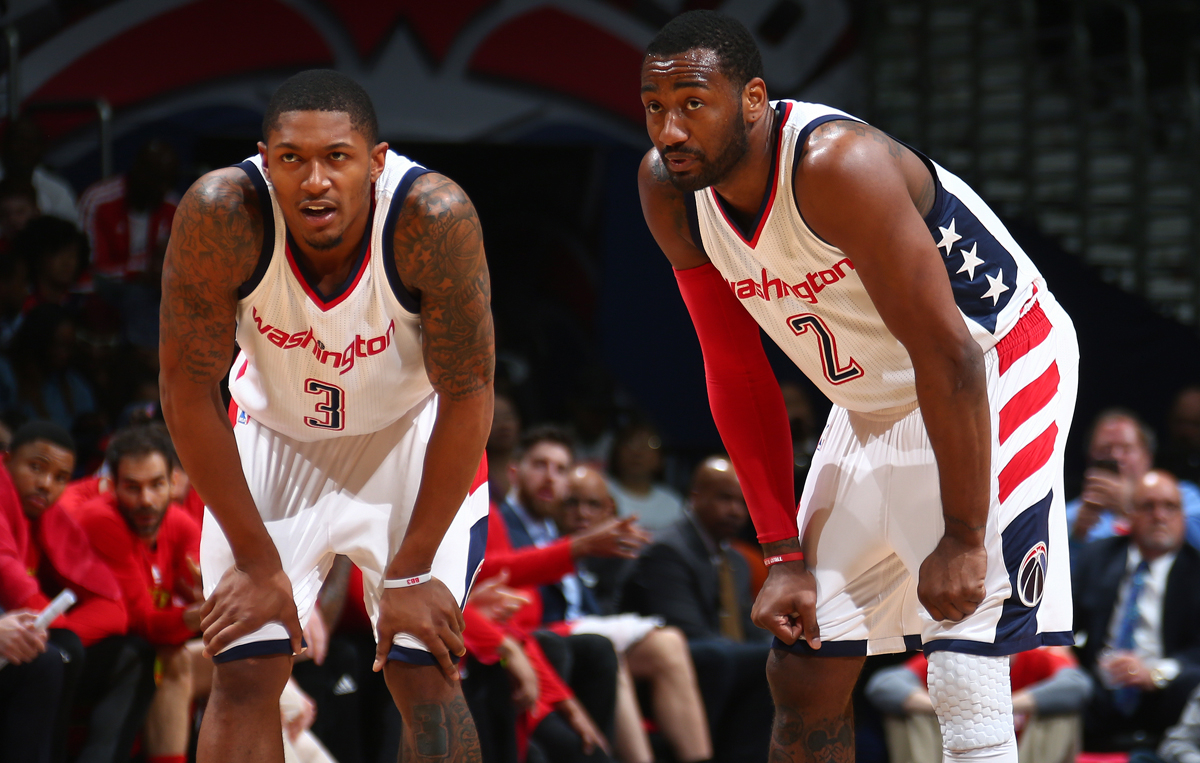 John and I fed off each other all year and were closer than ever by season’s end (Getty Images).

John was probably my biggest encourager. He trusted me with the ball over anybody else. Same goes for me. I wanted John to shoot it, too. And if one of us wasn’t making any shots, if we weren’t playing well, we picked each other up.

We’re both talented. There’s so many things that we can do to contribute and help our team. We constantly remind each other of that. We know that we have to be aggressive at all times, no matter who we’re playing, or what the score may be. If we want to be the best backcourt in the NBA, we’ve got to show up every night and prove it, constantly put the work in, and continue to challenge each other to get better.

And that’s how we feel right now. We are the best backcourt in the league.

That’s just the confidence and the approach that we have. We know that there’s a handful of talented guards in the league, and we’re not taking anything away from them. But we feel like we’re the best backcourt, and you’ll never hear us say anything different.

I talked a lot about Coach Brooks in a previous blog, but I can’t say enough how big he was for us in terms of the success we had.

He’s a proven coach. He’s shown that he can be successful, and that he can help a team make a run in the playoffs. He coached two of the best players in the game right now, and led that team to the Conference Finals and the Finals. So he came in with respect. This year, we got to see why.

He instills confidence in everybody. He gives everybody freedom on the offensive end. But the thing that we love the most is that he holds us accountable. He’s not afraid to speak up to anybody on the team, or voice what he wants. We relied heavily on him during the playoffs. 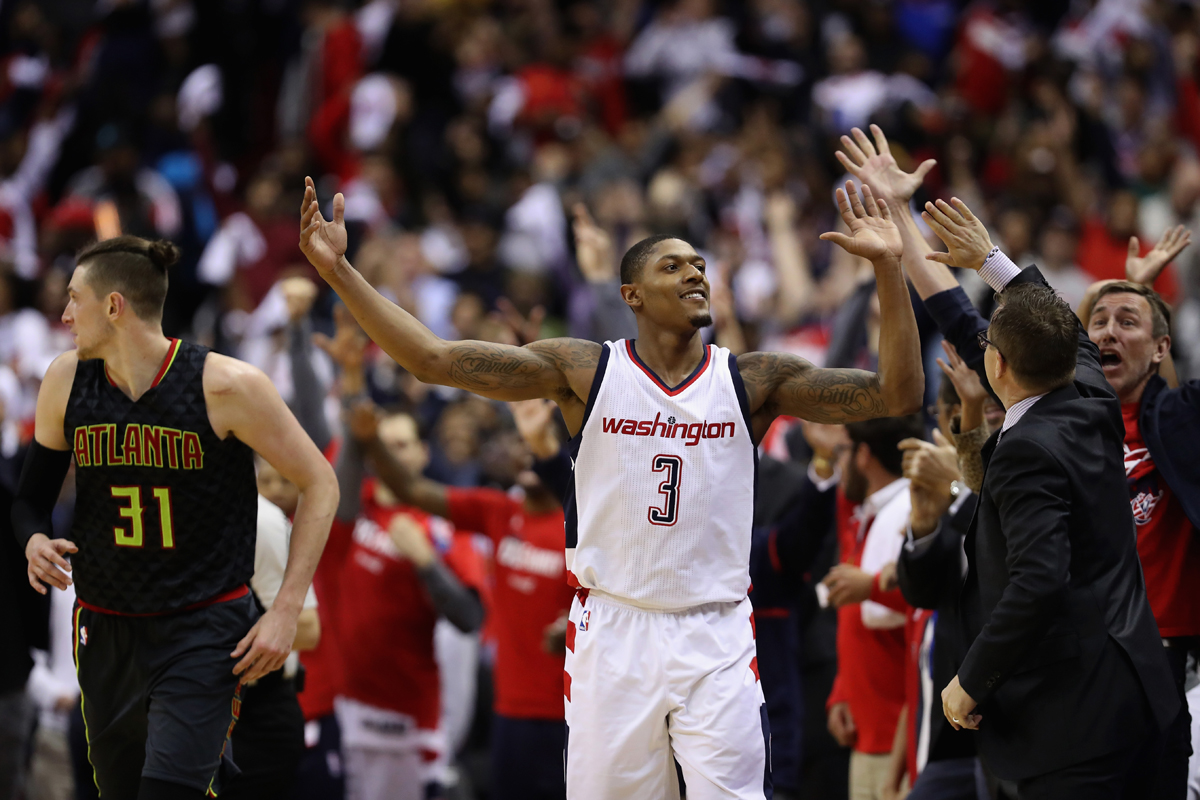 Coach Brooks is one of the best there is and it can’t be overstated the confidence he gives us (Getty Images).

On top of that, he is a true player’s coach. He has a relationship with everybody on the team. He shows no favoritism. He picks everybody’s brain. That’s what a lot of us love about him. He grants those of us who are leaders the opportunity to voice our opinions, and to come together as a team and change things.

We respect that he values our opinions and our thoughts, just as we do his. He’s a great listener, and a great teacher on top of that.

He did a terrific job, and we’re going to continue to get better together.

I feel like everybody on the team got better as the year went on. John had career-high numbers and was an MVP candidate. Otto Porter was one of the best three-point shooters in the league this year. Markieff Morris had career numbers. Marcin Gortat averaged a double-double. Kelly Oubre was great throughout the year. And Bojan Bogdanovic was a great addition.

Of course in the offseason in the NBA, you never know how everything will shake out. But I know I would love to have Otto back. We love Otto. He is a huge, huge part of our team, a huge part of our success. Each and every year he’s gotten better. He’s shown improvement. He’s gotten stronger. He’s definitely on the rise and on the cusp of being an elite small forward in the league.

At the end of the day, we understand that it’s a business, and that Otto has to do what is best for him and his family. But I feel like he is a part of our core, a key piece for us, and if we can have him back, we want him back.

OP, us Missouri boys, you know we’ve got to stick together. 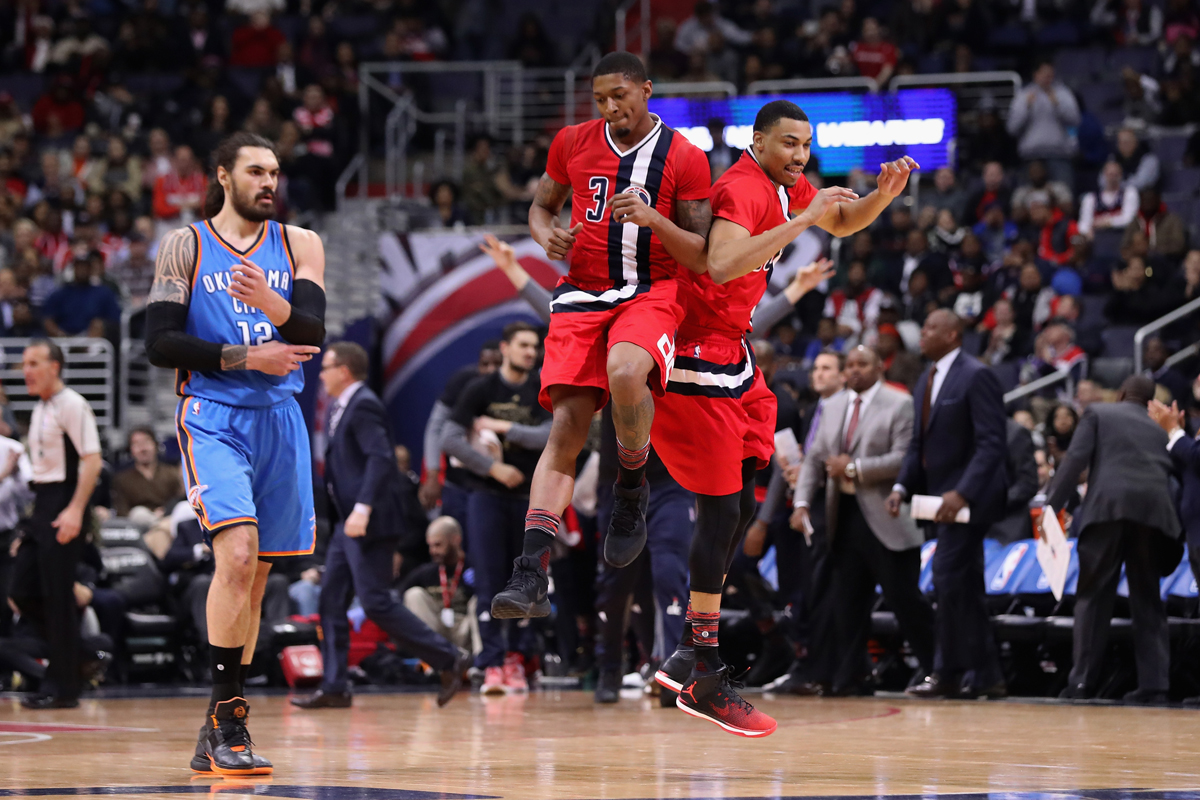 We definitely want and need OP back if we can have him. He’s grown tremendously as a player (Getty Images).

Keef also made a huge difference for us this year. We got him late in the season last year, and he gave us a great push towards the end of the year, but to have him for a full year was terrific. There was a span of games where he was shooting lights out, playing tough, tenacious basketball, and it was the same thing in the playoffs. It all carried over through the whole year, so it was big to have those contributions. I think he is one of the best forwards in the game. He continues to get better on both ends of the floor, and he’s going to continue to improve.

He’s also a true teammate, and a mentally tough guy. He laid it on the line for us all season, especially in the playoffs after he injured his ankle. He didn’t care what it took for him to be out there. His ankle was not 100 percent. It was swollen and beat up. Some days he could barely put pressure on it, but he duked it out. He competed his tail off for the good of the team.

KO really stepped up for us this year as well. I love Kelly. I can tell the game’s really started to slow down for him. He’s understanding cuts. He’s understanding how to make plays, and he’s just going to continue to get better at it. He’s definitely one of our best defenders. He’s also one of our best energy guys, and gives us solid minutes whenever he’s out on the floor. He has tremendous talent, and is a great athlete on top of that. He has the potential to take his game to unbelievable heights.

To get to where we want to be, though, we’re all going to have to continue to work. We all feel we can get better everywhere. We all have room to improve on what we did this season. None of our games are perfect.

It starts with defending. Our defense this year wasn’t as great as we wanted it to be. We’ve got to get back to locking guys up like we did in that stretch of games in the middle of the year. We were one of the top five defensive teams in the league at that point. 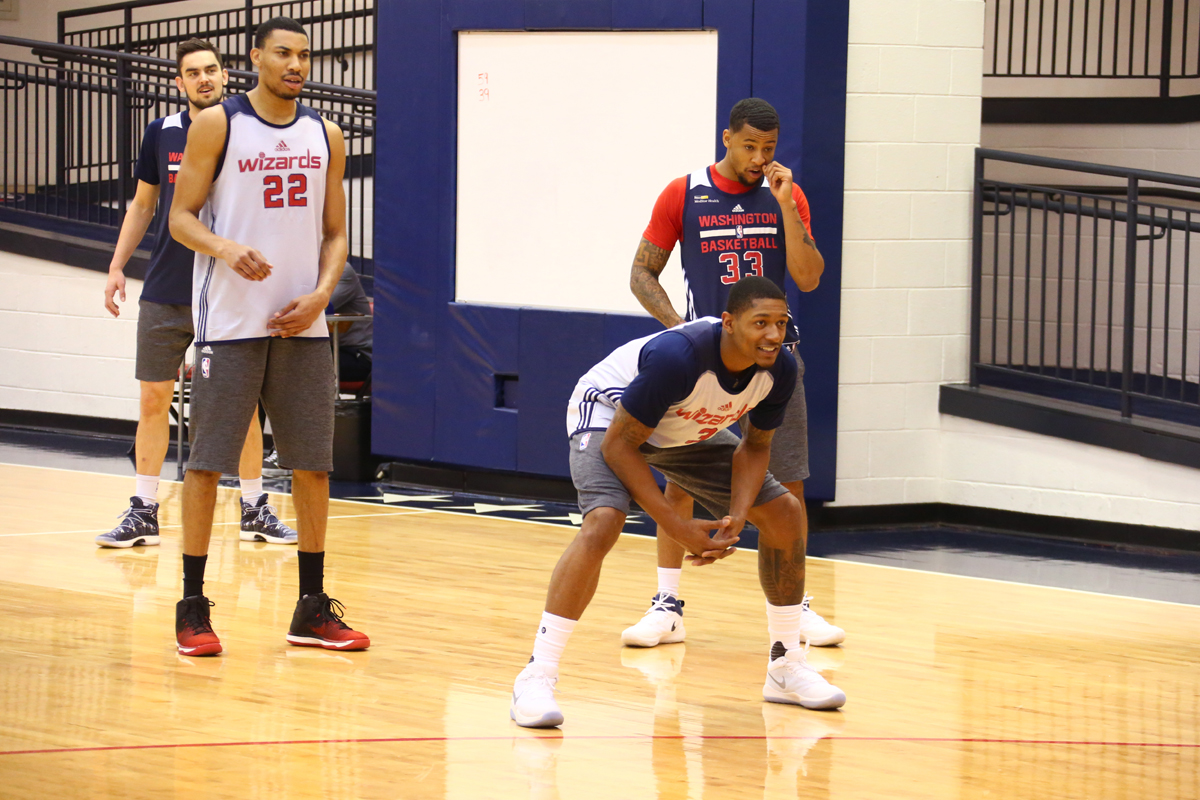 We have to pick it up and be consistent on defense all season to be as successful as we want to be (Getty Images).

A lot of that is just a mindset. I think it’s just the will and the want to get a stop, to want to play defense. We can’t have any nights off, any plays off. If we want to be a great team in this league, one of the top teams in our conference, we have to do that each and every night.

We also have to realize that we’re a targeted team, that every team is going to give us their best shot and they’re going to go at us on both ends. We’ve got to be ready to accept that challenge, and again, that starts with our defense. And once we get it going defensively, we can get anything we want on offense. We score 100-plus points a game. That’s not usually our problem. It’s getting those stops and keeping other teams from scoring points.

That’s something that we can instill from the get-go next year, from training camp and after. The next step for us is being more consistent with it on a daily basis, making a habit of it. Day-in and day-out, being able to be that top defensive team, knowing that no matter what goes on offensively, we’re going to defend and we’re going to rebound, and be one of the best teams at it.

GETTING THE MOST OUT OF ME

Personally, when I look back at my season, I have to credit my trainer, Drew Hanlen, for the offseason work that he helped me with, and my PT guy, Jesse Phillips. He’s one of our trainers with the Wizards this year. Both of those of guys, I credit them both, because they kept me on a great routine, great regimen in the summer, one that helped my body continue to get stronger and stay healthy. 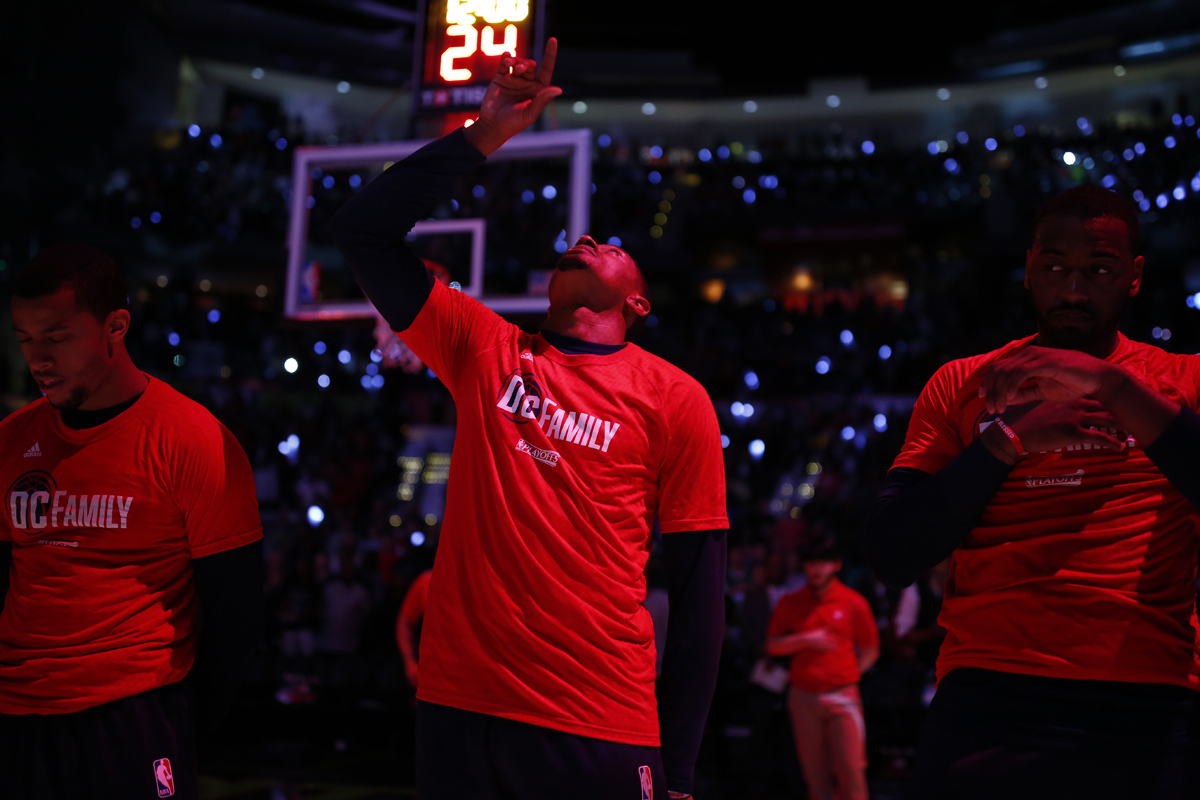 I’m most proud of my durability this season. To be able to play as much as I did, at the level I did, was a huge accomplishment (Getty Images).

That’s my biggest accomplishment, by far, being able to play 70-plus games and to just be on the floor. To have that full and healthy season, to be able to showcase my talents and be able to help my team get wins. That’s all that matters to me. I could care less about my numbers. I want them to be great, but all in all, my health is more important than anything. As long as I’m out there with my teammates, that’s all I care about. So to be able to have a full year, that’s definitely my biggest accomplishment.

That also made it easier for me to play my best, easier to get into a rhythm. I didn’t have to sit out a large amount of games and then get used to playing with my teammates again. I always had a constant intensity and rhythm this year, and that’s all I needed. I credit my health. I credit God for sure, and I’m thankful for a healthy season.

Hopefully, I can continue to do the same thing moving forward. If I do that, and we can all improve, I see great things ahead for our D.C. Family.